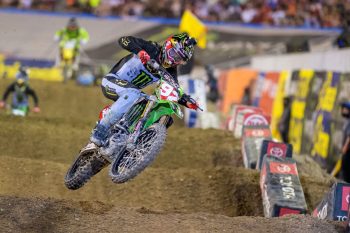 A livid Adam Cianciarulo has spoken of his disappointment after losing the 2019 Monster Energy AMA Supercross 250SX West title in the Las Vegas finals.

The Monster Energy Pro Circuit Kawasaki was in a position to clinch a first-career supercross crown, however a heavy crash while running third crushed his hopes.

Cianciarulo caught a tuff-block on lap 11 of the final, causing him to eject – the impact severely damaging the handlebars and controls of his factory-backed KX250. Following a brief pit stop for repairs, he went on to finish in 20th position.

“I felt fine as I came through that section but ended up on the ground,” said Cianciarulo. “I think I would have been fine if the bike didn’t get mangled in the crash – it’s unfortunate that I couldn’t get back out there to fight back.

“There are a lot of guys that have helped me get here and as much as I’m going to be hard on myself, I wanted to get this for them too. I made the mistake and wish I didn’t, but you can’t turn back time and I have to keep looking forward. I’m going to get one of these things some day.”