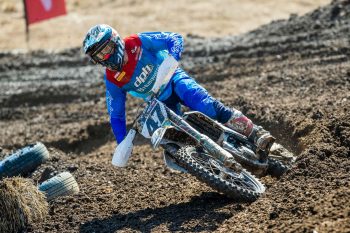 A rear brake issue in the final moto hindered Todd Waters’ bid for victory at Broadford’s third round of the 2019 Pirelli MX Nationals in Victoria last weekend.

The DPH Motorsport Husqvarna rider rode to two stunning victories in the back-to-back Sprint races, granting him the full 35 points in the combined results before salvaging second in race three while being dealt with the mechanical issue, crediting him second on countback after levelling on points with victor Kirk Gibbs (CDR Yamaha Monster Energy).

Waters has won the most motos this season, however he lost a large portion of points at Wonthaggi after his FC 450 was severely damaged in a main straight clash – a points gap that he significantly closed on the weekend.

“Broadford wasn’t a bad day, but I’m still a little disappointed to take second after claiming superpole and two race wins,” Waters explained. “We had a bit of a roll going, but after working my way from fifth up to second, I had an issue with the rear disc and had to race most of the final moto with no rear brake.

“Salvaging second with a problem was a great result for the championship and we’ve closed the gap to the points lead to nine going into the double-header at Murray Bridge. With three weeks until the next round, I’m focused on myself and want to improve my performance to ensure we achieve the results we work for.”