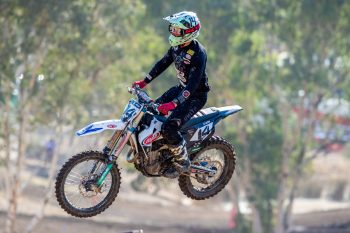 Jesse Dobson has been encouraged by delivering another strong performance at Broadford’s Pirelli MX Nationals on Sunday, the Husqvarna-mounted privateer determined for more after landing inside the top five overall.

The popular Queenslander has been highly-impressive this season, cementing his plans to contest the championship just days out from the season-opener last month.

Dobson ranked fifth in the combined Sprint race results, and went onto back up the morning’s performances with a fifth place finish in the final outing, crediting him fifth overall.

“A positive and consistent day for me,” said Dobson. “It was good to be in superpole again and I felt like my lap was solid even though I made a slight mistake, so I was happy to start the day strong. I got great starts in both the back-to-back races, but lacked the intensity in the early stages of the race, giving me some work to do to stay with the lead riders.

“Arm-pump became an issue in both races for me, so I was glad to come away with a sixth and fifth. The last race of the day was a slow start, but I tried to relax and pick my way through the field, I fought my way back to fifth which I’ll take. Overall, I’m satisfied with the day, but I want more – I’m happy with my fitness considering the lack of bike time I’ve had and I’m confident as the season progresses, I will too.”