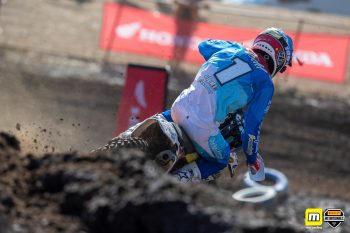 DPH Husqvarna Factory Racing team has once again proved itself as a force to be reckoned with in the chase for both the 2019 MX1 and MX2 Motocross Championships with all three racers recording solid results and consolidating points at Broadford for the third round of the MX Nationals.

Once again taking four of the five race wins over the two classes, Todd Waters (FC450) only narrowly missed the overall win with equal points to first, Wilson Todd (FC250) once again took all the MX2 race wins and Bailey Malkiewicz (FC250) continues to progress with seventh overall.

Dale Hocking, DPH Husqvarna team owner: “It was great to get a race weekend without rain! Broadford is a great track, and we saw some great racing. Second, first and seventh overall finishes in a three-rider team really is something to be proud of, especially when you look at how close Todd is to the MX1 points lead. I can’t thank our partners and our team enough for the time, effort money and enthusiasm they put in to allow us to achieve these results, but I can tell you that we’re working hard to ensure that we can keep moving forward. Bailey is looking stronger every time he rides, Wilson continues to rider smarter, consolidating when things aren’t perfect and controlling when they are while Todd continues to show the motivation, determination and skill required to win at the highest level. I’m really happy with the teams progress and I’m looking forward to going racing again!”

Todd Waters: “Broadford wasn’t a bad day, but I’m still a little disappointed to take second after claiming superpole and two race wins. We had a bit of a roll going, but after working my way from fifth up to second, I had an issue with the rear disc and had to race most of the final moto with no rear brake. Salvaging second with a problem was a great result for the championship and we’ve closed the gap to the points lead to nine going into the double header at Murray Bridge. With three weeks until the next round, I’m focused on myself and want to improve my performance to ensure we achieve the results we work for.”

Wilson Todd: “It was another great weekend on the bike, the team is giving me everything I need and working with the Beaton’s through the week really has me feeling in control when I get to the track. I wasn’t 100% comfortable in the first race and then I came together with a lapped rider on the last lap and I knew Kyle (Webster) was close, so I just regrouped and kept my head and we managed to keep the lead and get the job done. It was a different story in the second race, with the guys (DPH) making some changes to get things back on track to take the win.”

Bailey Malkiewicz: “Things are starting to come together for me now. I still have some more to learn, and I’m taking on-board a lot from everyone in the team. I was penalized for waiting too long for the green flag in qualifying though, otherwise I could have qualified as high as third with the lap I put in. I’m confident that I’ve got the speed to run towards the front, so some more work on my starts, and reducing some of the small mistakes I’m making and then I’ll be looking to chase Wilson down!”

Rounds four and five of the MX Nationals are to be hosted in Murray Bridge, South Australia on May 4/5 for the season’s first, all important double header race weekend.