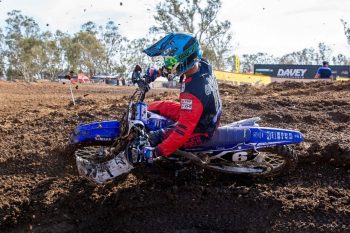 It was a mixed bag of results for the Yamalube Yamaha Racing Team at round three of the MX Nationals with Jay Wilson landing in third place for the round in the MX2 championship, while Richie Evans battled illness all day.

Jay Wilson entered the round with minimal bike time following finger surgery after round two. While attempting to held load the team truck, Wilson crushed his finger in the stairs of the rig bad enough to require surgery the following day. He was unable to ride until the day of the event and the podium position was a pleasant surprise.

Wilson lacked feel on the clutch as it was the finger he used to control the power delivery of his YZ250F and as a result, his starts weren’t to their usual standard, but he scrambled well to make up the lost time.

In moto one, he quickly moved into sixth on the opening lap and was making a move into the top five when he fell on a slippery down hill section of the track. He re-joined the race just inside the top 15 and began to work his way forward. The longer 30 minute race worked to his advantage and Jay was able to claw his way to fifth and gain valuable points despite the mishap.

The second race fared better, although his start still wasn’t what he wanted. He moved into the top five by the mid-race point and then with some clear track began to quickly close the gap on the riders in front of him. He made quick work of two riders in front of him to snare third and then made some serious in roads on the second placed rider only to run out of time and shadow him over the finish line.

His 5-3 results gave him third for the day and he now sits second in the championship after the opening three rounds.

“Today was the best I have felt on the bike in motocross so far this year,” Wilson offers. “The first race I was covered in mud and just did what I had to do to get back to fifth as the first four were long gone but in the second moto I really began to gel with the bike and attack the track. I felt awesome and just wished it was the 30 minute race and not the 20.

“So, happy with today and happy to come out with some good points. It wasn’t looking real good after Wonthaggi but thanks to the team RACESAFE we were able get on track and keep the championship alive.”

For Evans, it was a tough day. Picking up a mystery illness on the Saturday Night prior to the event, Evans spent the night in the bathroom unable to keep anything down and he struggled for energy and focus as he battled through the day. He was clearly unwell, and it was a super effort to put his depleted body through an hour of torture on the challenging Broadford track.

Evans finished with 14-8-18 results to take thirteenth for the round. To make things even more challenging for him, the MX1 class did the sprint format with two back to back races to really put a strain on his body. At the completion of the day he was again in the care of the RACESAFE Team trying to ride out the bug that effected a few riders over the weekend.

“Today was terrible as I just didn’t have any energy and felt like I was on the verge of shutting down most of the day. I remember looking at the clock at 12.35am last night and then went strength into the bathroom and didn’t come out until I had a quick shower to come to the track. I don’t think I have ever felt that bad in my life.

“I tried my best, but I was in no condition to race properly and I’m just thankful I made it through the day and this virus passes quickly so I can be prepared for Murray Bridge as it’s a two round weekend there,” Evans said. 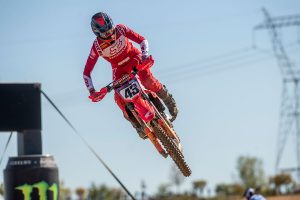 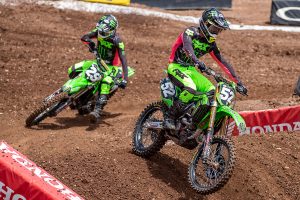