Risk not rewarded for Cairoli at Trentino grand prix 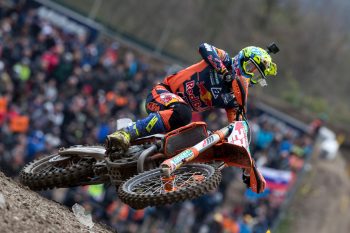 Nine-time world champion Antonio Cairoli is adamant he should’ve won last weekend’s fourth round of the 2019 MXGP World Championship at Trentino in Italy, however he took a risk that almost ended with injury.

The Italian engaged in a battle with former champion Tim Gajser (Honda HRC) in both outings, although with the overall on the line in moto two, Cairoli increased the pace to move by the Slovenian, crashing at speed to relinquish the lead and accept runner-up honours on the day.

“It is a positive weekend overall but I’m not happy with my second moto because I took a risk and crashed when I should have had the GP,” Cairoli explained. “A crash is always possible in motocross but we should take care not to get injured and it was close today.

“I’m disappointed by that but I’m happy to make the podium again – that’s four this season with three wins and a second place so it is difficult to be negative about how it has gone.”

Cairoli leads Gajser in the championship rankings with a 16-point advantage as MXGP returns to action on 12 May at Mantova in Italy.