MXD points leader on the beginning of his professional career.

Regan Duffy isn’t an unfamiliar name on the Pirelli MX Nationals circuit, having won a handful of titles in the junior support categories over the years, along with four Australian Junior Motocross Championships to his name from a fruitful amateur career.

A long-time member of the KTM Junior Motocross Racing Team, Duffy has always been tipped to be one of the next emerging talents that takes the industry by storm, and this year, he embarks on his rookie MXD campaign in the MX Nationals with the Raceline KTM Thor outfit.

The transition to professional racing has far been smooth sailing with two rounds already under his belt in the current series, which he attributes to the welcoming nature of the factory-supported Raceline operation. 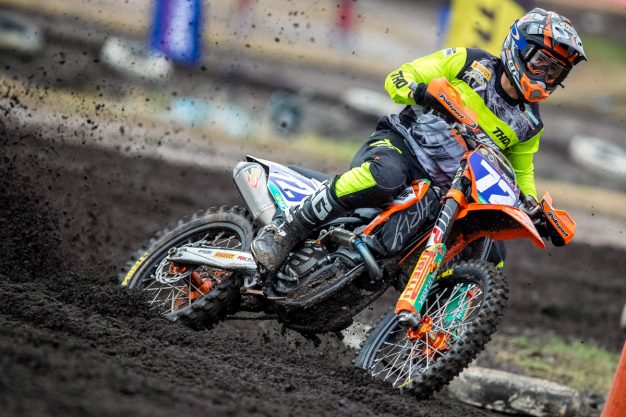 “I think I got a glimpse of how factory team works each year at the junior nationals when KTM had it’s big truck there, but it’s definitely a big step going into a factory team full-time,” Duffy explained to MotoOnline.com.au. “It’s been good so far – they’ve made the transition smooth for me. There’s no pressure and I’m just working my way into it and learning as I go with them.”

Making his MXD debut at Appin’s opener, the Western Australian talent, who’s just 16 years of age, stormed to the front of the field, instantly making his mark on the category, however things unravelled in the horrendously muddy conditions, which saw him demoted to seventh position in the sole moto that was eventually run.

It only fuelled Duffy’s fire for Wonthaggi’s second stop in Victoria, where put on a commanding display as he dominated both motos, securing his maiden overall victory while establishing himself as a favourite for the development class crown.

“It felt like that’s where I needed to be after I won those motos, I was stoked,” he continued.” I didn’t expect to come out with the points lead – at Appin I had a bad run and came out with seventh, so I knew I had to do my best at Wonthaggi and have some luck on my side. Purvis had a bad first race and so did a few other guys, and I ended up coming out with a four-point lead.” 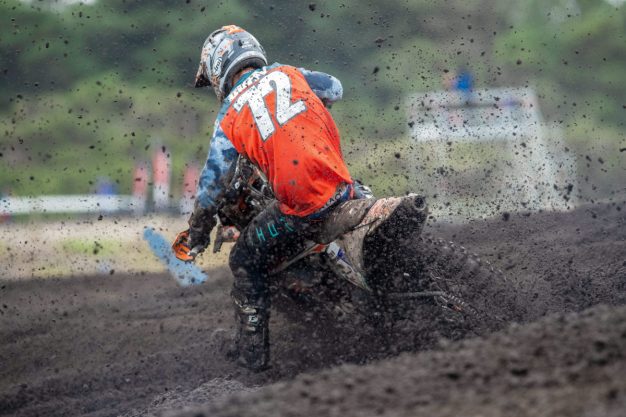 With the points lead now in hand and the red-plate set to grace his KTM 250 SX-F this weekend at Broadford’s third round, the number 72 speaks with maturity beyond his years when discussing what this means in just the infant stages of the 10-round, eight-stop championship.

It’s probably thanks to people in his corner, such as former MX Nationals contender and now riding coach to many of the country’s best, Ross Beaton. Duffy admits Beaton has played an instrumental role in his development, who will no doubt serve as a valuable resource in his pursuit for the highly-desired number one plate.

“You definitely can’t relax when you have the red-plate, it’s pretty heavy. You can’t change your program I don’t think – a round win means nothing. I have to back it up for eight more rounds. Ross is a real big factor my development as a rider, he’s helped me out a lot of with technique and training.

“The biggest thing with Ross is how good his feedback is – he gives me the best possible chance to be a better. Even at the track and being able to walk around with him, his insight after being there and doing it is good to be able to learn from.” While the MXD crown is the immediate goal for 2019, Duffy has already established a plan for the foreseeable future, with Europe being the ultimate target in 2021 following a stint in MX2 domestically next year.

“Next year I’d like stay here and move up in to MX2 and just develop as a rider,” he added. “After that, saying I do good in MX2 next year, I’d like to go over to Europe and race EMX250 or the MX2 World Championship. The whole thing depends on my results here – I have to go good before going onto the next stage. I’m not going to go Europe – where I want to be – underdone.” 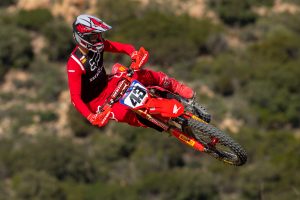