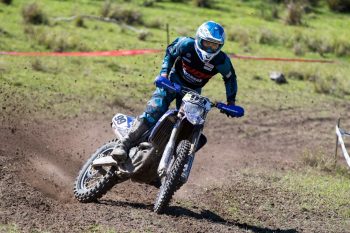 Piloting the all-new WR450F this season with Yamaha Yamalube Active8, Green wound up third on the Outright results sheet on both days of racing, finishing just 40 seconds shy of the talented duo in Sunday’s proceedings.

A pair of runner-up results in the E2 category at Dungog sees the number 99 maintain his P2 ranking in the championship standings as the series now heads into an extensive break.

“The WR450F is an amazing bike and every time we race it, we learn more about its strengths and how to make them work for me,” Green explained. “We didn’t change anything major but just some fine tuning to the power and suspension made the bike more ridable for me and I’m so impressed with how it runs.

“This weekend was better for me and I was able to grab third outright each day so that’s a step in the right direction. Milner and Sanders are world class riders, but I’m busting my butt trying to close the gap on them and this weekend I felt we were a little more competitive with them in a lot of the special tests.

“The team did a fantastic job as always and we are already making plans for the up-coming rounds to keep the momentum building.”

The AORC will return to action on 20-21 July at Kyogle in New South Wales.