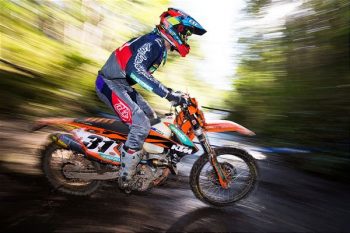 KTM Enduro Racing Team’s Daniel Milner has increased his advantage in the 2019 Australian Off-Road Championship (AORC) after winning rounds three and four in the E2 category at Dungog, New South Wales, on 6-7 April.

Milner delivered yet another phenomenal performance aboard the KTM 350 EXC-F across the pair of Enduro format rounds, topping Saturday’s action in class and setting the fastest total time overall in near-perfect conditions.

Sunday’s results remain unofficial due to technical difficulties in timing and scoring, however Milner was once again the class of the E2 field on his way to the provisional round four victory.

It was a more challenging weekend for KTM Enduro Racing Team teammate Lyndon Snodgrass in E1 riding the KTM 250 EXC-F, overcoming a number of rare mistakes to claim fourth in class on Saturday and an unofficial fifth today.

Next for the 2019 Australian Off-Road Championship (AORC) are rounds five and six of the season, to be contested at Kyogle, New South Wales between 20-21 July. Visit www.ktm.com/au for further information on KTM Australia.

Glenn Kearney – Motorsports Manager, KTM Australia: “We had all but perfect conditions through the weekend due to rain in the lead-up and it was a really strong showing from Milner once again. He went 1-1 both days in E2 on the KTM 350 EXC-F and it was impressive to watch – he’s very precise, so fast and doesn’t put a wheel wrong. Unfortunately Lyndon missed the podium and was fourth on Saturday and fifth today in E1 through a few mistakes. He had the speed and was right there, but those costly errors kept him just outside of the top three. We know what to work on though, have outlined the areas to focus on and we will be doing that during the upcoming break in the series.”

Daniel Milner – KTM 350 EXC-F: “Saturday was a really good day for me especially, since I didn’t make any mistakes and had a clean run through the round. I was able to get it done in class and also was fastest overall, so that was a plus. Today I struggled in a few spots, had a crash and lost a bit of time there, so that hurt outright, but I still managed to win in class. We have a break now in terms of AORC, so we will keep working hard and I’m looking forward to the Hattah Desert Race coming up.”

Lyndon Snodgrass – KTM 250 EXC-F: “It was a little bit disappointing for me to finish fourth on Saturday and fifth today. I made a few mistakes that held me back, but to be honest, I feel like I was a bit off of my usual pace as well this weekend. I need to keep working and practicing between now and the next round, so I will do that and hopefully be able to improve on my sprint speed. That’s the plan and I know that we can be back up the front when the season continues.”