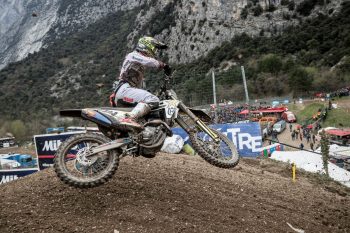 A month-long break in the 2019 MXGP World Championship has presented itself as a timely opportunity for Jed Beaton to make improvements as he continues the come-back from injury.

The weekend’s fourth round at Trentino in Italy saw the likeable Australian muster up a 12-13 results sheet for 12th overall, positioning him 13th in the MX2 championship standings.

“I feel like it’s been an okay weekend for me,” Beaton commented. “Things started off a little slow on Saturday and certainly not how I wanted it to go. But Sunday was much better. Two poor starts held me back in both motos though.

“I felt like my riding was good, but I have to get out the gate better. We have a good break now in the championship, so it gives me plenty of time to keep working and to focus on improving ahead of the re-start of the series.”

The MXGP World Championship returns to action on 12 May at Lombardia in Italy, marking round five of the now 18-stop series.