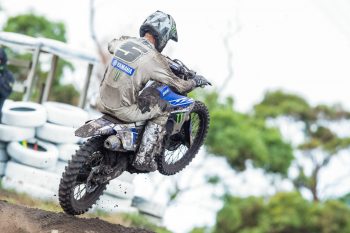 MX1 title contender Kirk Gibbs has been left ‘frustrated and angry’ following a challenging encounter at Wonthaggi’s second round of the 2019 Pirelli MX Nationals last weekend.

The 2016 Australian champion endured difficulties all day long, colliding with American Justin Rodbell (KSF Racing Suzuki) in race one, while in the final outing he was involved in a first turn clash, damaging his CDR Yamaha Monster Energy YZ450F in the process.

Mustering up an 8-7 scorecard, the South Australian managed to wind up fourth overall in the round’s classification, maintaining third in the championship rankings as he sits 15 points shy of leader Hayden Mellross (Raceline KTM Thor).

“It wasn’t a great day for me and I leave here pretty frustrated and angry,” Gibbs admitted. “I was way back in moto one and was moving forward when another rider went down and took me with them, and I lost plenty of time there. Then in the second one I went down at the start, had to stop into the mechanics area to get the bike straightened out and was a long way behind the field when I re-joined the race.

“I kept on chipping away and managed to get myself back to seventh and felt I rode alright but seventh isn’t where I belong and makes my determined to bounce back at round three in a couple of weeks’ time.”