Despite facing penalties in both motos, CDR Yamaha Monster Energy’s Luke Clout broke through to earn his maiden MX1 victory in the Pirelli MX Nationals at Wonthaggi’s second round on Sunday. MotoOnline.com.au tracked down the talented number four to gather his thoughts on a supremely consistent weekend! Congratulations, it’s an awesome result with the overall win. You must be happy with that…

Yeah I am – it’s been a long road. This is my third season [in MX1], and I’ve been close a few times with some moto wins and things like that, but to actually put it together and get it done feels really good. Especially this early in the season – I knew I could do it – my pre-season has been really good, and I’m really happy with the team and really happy with the bike. I’m just in a good place at the moment – I’m confident. I had a bit of luck today, but I think if you put in the work and do everything right, the luck kind of goes your way. I rode well, but in saying that, I had some bad luck with some penalties – we’re even now and ended up with the overall.

Tell us about those penalties – was was the situation from what you understand?

To get the overall through your consistency and two really good performance, that really makes up for it, doesn’t it?

Yeah, obviously 2-2 on paper looks like we got beaten both times, but I think if you were down here, you would’ve seen the riding, and I’m really happy with the maturity in my riding today. I think that’s a big thing Dacka and I have been working on – just letting the race come to me, and not making any stupid mistakes early on. I think I did that today – look where we ended up. I’m going to go home, continue to work and come back with confidence. I’m looking forward to round three. 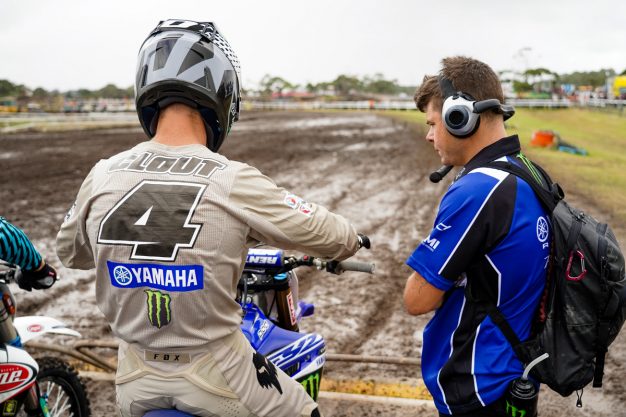 Like you said, your third year in the premier class with three different teams as well during those years. Is CDR everything you expected when you signed with the team?

It’s my third year and three different brands – that in itself is quite hard to get your head around – working with new people, a new bike and just seeing how everyone works. That took a while to get used to on the other teams, but when I came across to CDR, day one was like I knew the guys for years. Outside looking in, it’s the best team, but when you’re inside, you can tell why they win so many races and championships. It’s the professionalism, everyone on the team has a job and they want to win, and I want to win badly for them. I’m happy I can reward them with a win today.

What does this do for a rider like yourself? What does it do for your confidence and believing you can not only win an overall, but also run up front and be there?

I’m quite vocal with my ability, and I have been for quite a few years. It just hasn’t fallen my way a lot of times – I’ve come back from injuries and things like that. Deep down, I always knew I could win – it’s just taken the right group of people, and just myself to believe. This year I’ve believed the whole time – the entire pre-season I believed I could do it, and look where we are – round two and we’ve already won. I’m going to continue on, work hard and roll with this confidence and com into round three swinging.