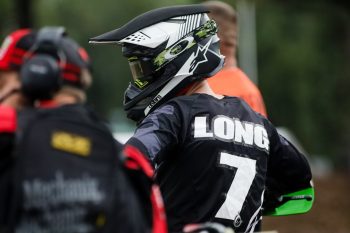 Dylan Long has withdrawn his entry from this weekend’s second round of the 2019 Pirelli MX Nationals at Wonthaggi in Victoria as he continues to recover from an elbow injury.

The Empire Kawasaki rider’s season started in a bitter manner at Appin’s mudder less than two weeks when a first turn clash in the one and only moto saw him damage his right elbow, prompting him to make an early retirement from the round.

Hopeful of making round two, Long discovered in the past week after visiting specialists in Melbourne that he’ll have to sit out this weekend’s event in order for the damage to adequately heal, which could see him benched for an indefinite period.

“About five years ago I crashed and broke the end off my elbow, and after I had surgery, I haven’t been able to straighten my elbow out – it was a pretty big surgery and I couldn’t get my arm straight at all,” Long explained to MotoOnline.com.au.

“With the crash that I had [at Appin], my elbow hyperextended on a weird angle when I got hit. My elbow not being able to bend straight, and how much it was bent in the crash, it’s stuffed some ligaments and the joint around in my elbow. I’ve gone to some of the best [specialists] in Melbourne to try and get it sorted, plus visiting my physio in Albury.

“They’re going to let me know how I’m going – it’s a weird one, with broken bones you know you’re out for four weeks or whatever. I was hoping to be on the line this weekend, but obviously went in to see these couple of people, and they said there is no way I’m racing this weekend.

“I’m hoping to be back for the next one at Broadford – that would be ideal, but I’m really not sure about that either. I’ll just have to keep coming back and wait until it’s feeling good.”