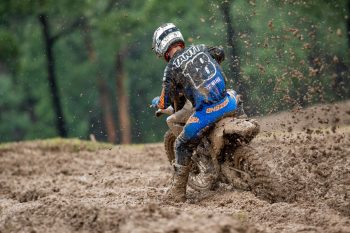 MX2 contender Aaron Tanti believes he ‘threw away’ a good result at Appin’s opening round of the 2019 Pirelli MX Nationals, which saw the second motos of the day cancelled due treacherous and muddy conditions.

Tanti, on debut with Serco Yamaha, made a mistake in the mud while holding down second which later promoted additional issues for him in the eight-lap encounter, suffering numerous falls before crossing the line in P10.

“That was such a frustrating race,” Tanti declared. “I was in second and not even thinking about anything other than keeping out of the mud and keeping my momentum going but I made a mistake and went down which made riding so hard.

“I couldn’t really grab the grips and also my feet and ankles kept slipping from the bike and it led to a couple more falls, one of which I nearly got bogged. It was all on me and I threw away a good result that we have worked so hard for. All I can do now is move on and forget about this round and redeem myself when we get to Wonthaggi.”

The New South Welshman, who won the opening round in 2018, is looking to make amends at Wonthaggi’s second round, scheduled for 31 March in Victoria.