In an incredible return from the MXGP World Championship, Todd Waters rose through the brutally challenging conditions and shortened scheduled at Appin’s first round of the 2019 Pirelli MX Nationals on Sunday to secure victory in the MX1 class. MotoOnline.com.au tracked down the DPH Motorsport Husqvarna rider to gather his thoughts on the weekend in this edition of Debrief. 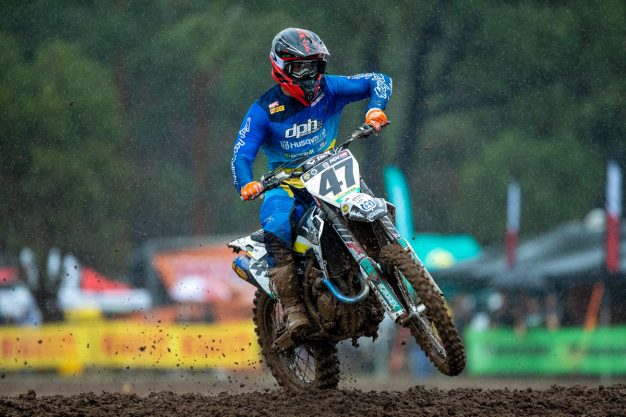 Congratulations on the result, it’s an awesome way to welcome yourself back to the MX Nationals…

Thank you, it feels good! Unfortunately the weather is not what everyone wanted for the first round – we all wanted to showcase what we’ve been working on. I’ve had a great pre-season and I’m back with Husqvarna – I was super excited for the first round, but the skies opened up and it was a mud-hole. It’s nice to come away with the win, but we still don’t really know where we’re at. I’m looking forward to Wonthaggi and seeing how we go against everyone.

It was quite a heroic effort from yourself – you went down just metres out of the gate. From when you crashed at the point, what was the mindset that allowed you to work yourself from last through to first?

It was good – I was bummed about my goggles because I had prepared them quite well and expected to keep them on for the whole race, but then I didn’t even make the first corner and I was head first in a big puddle. My goggles were soaked and my helmet was full of water. I just turned the page and went for it – there was no thinking about the crash or the results, it was me and my bike. I was just leaning back ploughing through the mud and having a good time doing it really.

The conditions were so tough that people were going off the track and even cutting in sections – whether that was intentional or not – but was your opinion on what is probably one of the greater talking points to come out of the weekend?

It was a tricky one – there were points on the track where there were almost lines around every corner or jump, and it formed up from the slower riders getting lapped in the earlier races, so there was a main line on the inside of the track markers. I wasn’t aware of it because I had no goggles on and couldn’t see shit – I was just ploughing straight through the middle. I passed most people like that because they were trying to go into a rut, and I just ploughed through all the mud. When I caught up to Hayden [Mellross], I saw all these lines that he was doing, and I’m jumping all the jumps and doubling the whoops – I caught up to him and he’s taking all these cheater lines and putting a gap on me. I though it was bullshit – you can see on NRGTV that I throw my hands in the air because this dude is just riding the grass everywhere and I’m ploughing through the mud. I kind of got the shits with it, and they (officials) told me they gave him a penalty to him before I even caught up to him. There are points where I would’ve gone off the track, and there are points where other riders did it too – but if you’re going around and taking those lines every single lap, it’s not really fair. The guys behind will probably think ‘I’m gonna’ do it’, but then you’re going to have to disqualify the whole field. I don’t really care how difficult the track is, unless Kevin Williams says ‘hey guys, it’s so muddy we’re going to allow you ride a metre inside the markers and on the grass’ – until then, you’re not allowed to do it, are you? We all make mistakes, and the officials see that and will be like ‘Todd’s gone inside there, we’re gonna’ watch him’, ‘oh he’s done it three laps in a row, we’re gonna’ disqualify him’. The officials don’t jump in when you’ve gone off the track – they get you for continuously going off the track. No one else got done, and that line was pretty deep. There were a lot of people taking it on some places, but most of us were trying our best to stay on the track – I feel like there some trying their best to stay off it. 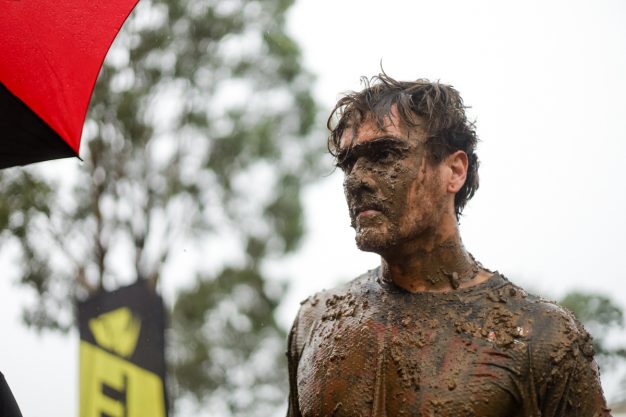 You’ve kind of cemented yourself as a mud rider, obviously earning your maiden MXGP podium in muddy conditions. When you knew Sunday was going to be mudder, were you quite confident heading into it?

I was kind of nervous. The problem with mud is that it can go both ways – you can have a ripper of a day, or you can have a horrible day and actually have a DNF. I was actually nervous that something bad was going to happen, and that can cause you to lose a championship. My focus was to go out there, keep out of trouble and have a good race – I didn’t even find myself 10 metres out of the gate and I was on the ground [laughs]. I was in a bit of a state at that point because it wasn’t the plan – I had to brush that off and get on with it. Overall, I am quite confident in the mud, and probably the biggest reason I am is because I like doing it – I like racing in the mud and I like riding in mud. I come from Cairns where it rains a lot of times in the year, so we used to practice a lot in the mud and I liked it a lot as a kid. I was nervous coming into that race, just that something bad could happen – your chances are quite high of having a mechanical, so I was a bit worried about that.

It was your maiden outing with the DPH Motorsport Husqvarna squad, how was it working with the team and being under their banner for the first time?

There are quite a few positives riding for the DPH team, the first being riding the Husqvarna – I’m feeling really comfortable on the bike and it suits me well. I grew up racing KTMs and I’ve had success with the company and Husqvarna worldwide and in Australia – the bike just suits my style. The DPH teams works really well for me – they’re just like a big family, they’re very cruisy and there’s no pressure. It’s not that I can’t handle pressure – I’ve ridden for big teams worldwide – it’s just enjoyable, and I had a ball on the weekend being there with Dale, Tash, and the boys Boyd and Pynee. Everyone is there to have some fun, and I enjoy that atmoshphere.