Husqvarna pilot starts title defence with third at the opening round. 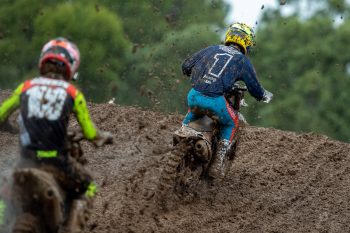 The number one made his MX Nationals debut aboard Husqvarna machinery at round one, while it also marked his return to the DPH Motorsport squad after wrapping up the title last year with Serco Yamaha.

The event, which was officially declared following the first motos due to horrendous and muddy conditions, saw the Queenslander push through in a consistent outing, winding up third to kick-start his title defence in a positive manner.

“I obviously want to win, but third is a good start for the season for me,” said Todd. “I’ve never raced a track in conditions like that before and it was tough to keep enough momentum to move forward without overdoing it in the corners.

“I focused on my own laps and riding through without battling or taking any extra risks, one mistake and you could be dead last in conditions like that. It’s great to be back in the DPH truck, and the FC 250 is a great bike to race. I’m looking forward to getting to round two though and really start racing.”

The MX2 category was won by Jy Roberts (Raceline KTM Thor) – the first MX2 overall win of his career – following confusion from early leader Jay Wilson (Yamalube Yamaha Racing) in the dying stages. The MX Nationals will now head to Wonthaggi in Victoria on 31 March for round two.