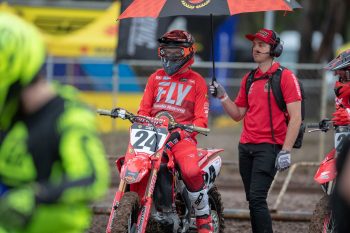 The season opener of the MX Nationals Championship, held in Appin NSW on the weekend saw riders battle it out in what could only be described as a mud bath.

Penrite Honda Racing’s Brett Metcalfe came into the round with conservative goals and was pleased to come out the other side in a very favourable position.

“I’m stoked to come away with 4 th – conditions were crazy and considering my injury – it is a victory in itself. It’s also a testament to the Honda for getting through all of that mud fault free.” Metcalfe said.

“As a team, we did a fantastic job, it’s been an awesome way to start the season and we are all looking forward to round 2,” added Metcalfe.

Penrite Honda Racing team director Yarrive Konsky was blown away with Metcalfe’s performance, admitting there were times he wasn’t sure Metcalfe would be able to race at round 1.

That is a testament to his unwavering commitment and desire to succeed. No matter what the odds, I am glad we backed one another and came out here to round 1 fighting.

His fourth place finish exceeded our expectations and put the team in a great position,” Konsky said.

The decision by race organisers to revise the schedule on the day was well received by teams and riders, with Konsky pleased rider safety is always at the forefront of official’s minds.

“The conditions were trying, riders were removing their goggles, and visibility was poor and the safety of riders is paramount so we believe the promoters made the right call,” concluded Konsky.

The team’s focus now shifts to round 2 of the MX Nationals Championship, which will be held in Wonthaggi, Victoria on 31st March.