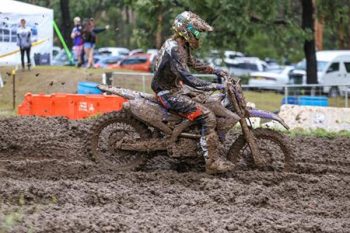 The first round of the MX Nationals, held at Appin, south-west of Sydney, was reduced to just a single six-lap moto for each class after intense rain saw the circuit descend into deep, sticky mud that even the most acclaimed riders in Australia found difficult to navigate.

With Williams Event Management making the call reduce each race to six laps, as well as cancelling superpole and the second round of races, the pressure was on each rider to perform in the almost impossible conditions. Clean starts and keeping the bike upright being the most widespread advice from all teams.

Yamalube Yamaha’s Jay Wilson was the first to take that advice, leading for the majority of his six laps, until a communication error and two tough final laps saw the YZ250F rider cross the line second. Max Purvis, on the WBR Yamaha, had a different race, moving forward from within the top five to finish on the top step: “The track was so deep and there wasn’t a single spot where you could relax. My goal was to keep it on two wheels as I know that if I crashed then I would get mud on my gloves and grips, as well as lose vision, so it was important to keep circulating.”

Dunlop Motorsport Manager Robbie Bugden: “The conditions at Appin were absolutely terrible, and I have to commend WEM for making the call to cut the racing short on the weekend. The fact that some riders were able to circulate was amazing, and a testament to their skill. It really was a balancing act for each rider to maintain momentum, find grip in the almost bottomless mud and navigate through each turn, so my hat’s off to Kirk, Jay and especially to Max in MXD. I also want to highlight the amazing start Daniel Milner had in the MX1 class. If not for some riders coming together in the first turn next to him, I’m sure the off-road ace would’ve been in the battle for an overall win in these conditions.”