Rain-soaked conditions too severe for the 2019 opener to be completed. 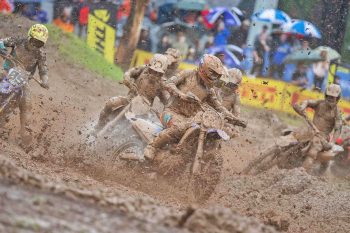 Williams Event Management (WEM) has cancelled the opening round of the 2019 Pirelli MX Nationals following the opening motos of each category at Appin’s Macarthur Motorcycle Club complex.

Unrelenting rain continues to lash the New South Wales venue, making for a treacherous start to the season and prompting the official decision.

“Obviously it’s a tough day, very, very wet,” WEM’s race promoter Kevin Williams told MotoOnline.com.au. “Everybody travelled a long way and wanted to get a race in, but it’s an expensive sport as it is and the conditions are getting worse.

“This way, everybody gets a moto in and the championship gets underway, but we’ve had to make this decision following the opening motos today. We already had to cancel the YZ65 Cup this morning, but unfortunately this is how it’s turned out.”

The opening round of the season went to Raceline KTM Thor’s Jy Roberts in MX2, while Maximus Purvis (WBR Bulk Nutrients Yamaha) topped MXD and a gritty Todd Waters (DPH Motorsport) won the lone MX1 outing of the weekend this morning.