Coming off the best season of his career, KTM Enduro Racing Team’s Daniel Milner maintained his incredible form at the weekend’s opening rounds of the 2019 Yamaha bLU cRU Australian Off-Road Championship (AORC) in Toowoomba, clinching victory in the E2 division in rounds one and two while topping the outright times on both days. MotoOnline.com.au tracked down the talented Victorian to gather his thoughts on the weekend for this edition of Debrief. 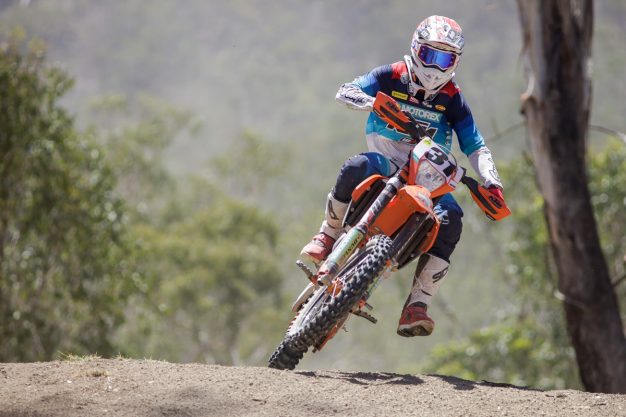 A really strong weekend and a great start to the new season. Congratulations, you must be stoked on the wins…

Yeah for sure, I pretty much picked up from where I left off last season. That was my main goal coming into this round – to keep that consistency going. I feel fit and strong this year, which in previous years, I think having a lot more bike last year made it a bit more of a struggle. Having the lighter bike this year makes it that much easier to throw it around and keep the ball rolling and not have it beat me up by the end of the day. I’m pretty excited, and stoked to finish the weekend out like I did – I’m excited to go to the next round.

Pretty brutal conditions out there this weekend being really dusty and dry, how did you find today’s circuit?

Today’s track was difficult – it was really technical and a bit scary to be honest. There were a lot of downhills that were really fast with sketchy rocks – it was pretty much survival mode. Chucky and I both had a real big off in the last one just going for it – we weren’t doing anything stupid or anything, we just got caught out on a couple bumps. I think I went down a little earlier than he did – he just got into my dust and then had a big one. Condition wise, it’s probably the hardest track I’ve ridden in a long time. The ISDE has difficult tracks, but they seem to hold together a lot more and they’re a bit slower in spots, where as this was a lot faster. It was pretty scary, but I’m stoked to come away from the weekend unscathed and only taking a bit of bark off the arm – I got away with it pretty good.

I saw you in that group of riders at the end of the third test talking to officials about the conditions. I think most riders were on the same page, but some didn’t agree. What were your thoughts on the situation?

I think it got to the point where it was too dangerous. That’s when all of us riders came in and said the same thing – Chucky said ‘come on, let’s go down and talk to the officials and get them to sort it out’. We all went down there, had a chat, and put our thoughts out there. It’s us that are racing out there, not them, so that’s where they have to see it in our eyes and see what we’re dealing with. When you have that many riders saying the same thing, it speaks for itself. It’s one of those thing where you have to pull it up before someone gets seriously hurt. The only people that seem to have a problem with that were the ones who weren’t in the lead and were real close to getting the lead – if it was the other way around, they would definitely want it cancelled, that’s for sure. It’s a bit disappointing to see that, but it’s good no one got seriously hurt. Unfortunately, [Matthew] Phillips hurt his knee – it’s a bummer because that dude is an awesome guy to have around the pits and he’s four-time world champion. To see him hurt his knee like he did is a massive bummer for us guys and the AORC. Hopefully he heals up quickly and comes back just as strong. 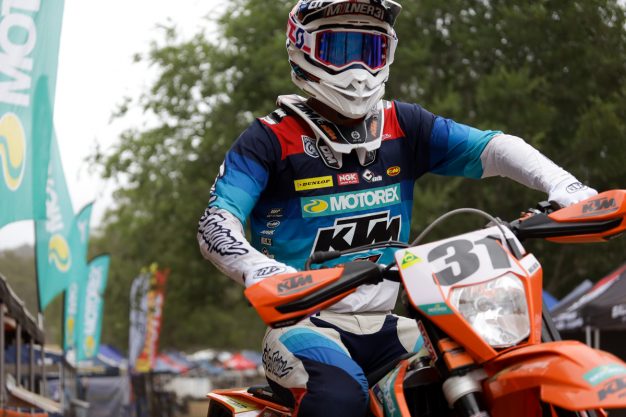 This year you’ve made the transition back to E2 – does your approach change at all riding a smaller capacity bike and also different riders?

I think the riders aren’t such a big deal to me because I’ve been always been racing Greeny in my career, and also we’re going for outright – that’s all that we care about. For Chucky and I, we’re just having a battle every weekend, which is awesome. Yesterday it was 0.2s between us in tests, so it really goes to show Chucks and I are really pushing each other. It makes it fun and exciting, that’s for sure. There’s a lot of pressure going into a test knowing that none of us can make a mistake. But with the bike, I think it suits me pretty well. There were some sections yesterday that I would’ve liked a bigger bore, but also some sections where I was absolutely loving the 350 because it was so easy to throw around. I’m gelling well with the bike and I’m really enjoying riding it – it’s a good combo.

You mentioned the outright result is all that you’re going for and care about, what’s your opinion on it not being officially scored?

I was that young guy who looked up to guys who ran the number one plate. For me, it’s hard to put all the time and effort that we do into training to get that number one plate – it’s the glory for when you’re a young kid – to no be able run it when you’ve earned it – it’s a bummer. I think when I was coming up through the ranks, it was always to get into the top 10 – from there it was to get into the top five, and then it was all about the number one plate from there. I know everyone looks at the outright – that’s definitely where they want to be checking out – no one really cares about the class. The class is good, but it’s definitely an outright kind of sport, and it’s been like that for so long. For them to change it whenever they decided to change it, it’s pretty disappointing to see it happen. It would be awesome to see them bring the outright back and get the glory of being the number one guy.