Six narratives to track in the 2019 Australian Off-Road Championship.

The 2019 Yamaha bLU cRU Australian Off-Road Championship (AORC) fires into action this weekend at Toowoomba in Queensland for rounds one and two. With a host of different formats, new and returning ridings, plus changes amongst classes, we’re in for an interesting season of off-road racing. In this edition of Countdown, MotoOnline.com.au highlights six storylines to follow this year. 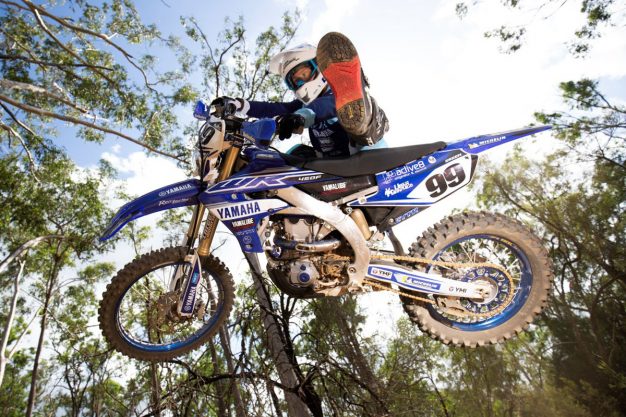 6. Race formats:
This season will see a selection of Sprint, Enduro and Cross Country formats rolled out at different rounds throughout the series, meaning both riders and teams will need to adapt to consistently be up front. This will no doubt shake up the championship, as differing formats will play into the favour of certain rider’s strengths, while it could also play against them. This weekend’s opener at Toowoomba will host a Sprint format on both days of racing.

5. Green’s new E2 machine:
Back to challenge the E2 class, Active8 Yamalube Yamaha Racing’s Josh Green has all-new weapon of choice this season – the heavily-updated 2019 Yamaha WR450F. Boasting a number of upgrades over its predecessor which are set to benefit Green, the New South Welshman is already feeling fast and confident ahead of Queensland’s first and second rounds.

4. Driscoll moves up:
Capturing the Under 19’s title twice, Michael Driscoll steps up to the professional ranks and will join the highly-competitive E1 category with Active8 Yamalube Yamaha Racing. An exciting new addition to the class, it will be interesting to see how the youthful talent fares, and he could very well serve up a surprise to the long-time challengers in the series. 3. Talent-packed E1 class:
The E1 division is overloaded with talented contenders, all who can challenge for the crown. This includes reigning champion Luke Styke (Active8 Yamalube Yamaha Racing), Driscoll, Lyndon Snodgrass (KTM Enduro Racing Racing Team), Fraser Higlett (Husqvarna Enduro Racing Team), plus add in Matthew Phillips (KTM) for at least the opening round, and the win could be anyone’s this weekend.

2. Return of Phillips:
With four EnduroGP world championships to his credit, the return of Matthew Phillip to the AORC is an exciting addition to series. Piloting KTM machinery, the Tasmanian favourite is set to switch up classes and engine capacities throughout the year, which means he won’t be in the mix for a title, although it will be cool to see him contend in different categories. This weekend at Toowoomba, Phillips will be lining up in the E1 class.

1. Milner and Sanders rivalry:
Daniel Milner (KTM Enduro Racing Team) and Daniel Sanders (Husqvarna Enduro Racing Team) fought for every second in last year’s championship, although Milner seemed to just edge the Husqvarna talent in the unofficial outright times on most occasions. This season, the duo have traded classes, which now sees Milner in E2, as Sanders moves to E3. If they keep up what they delivered in 2018, then we’re in for a thrilling year!