Qualifying problem not a concern for dominant Cairoli 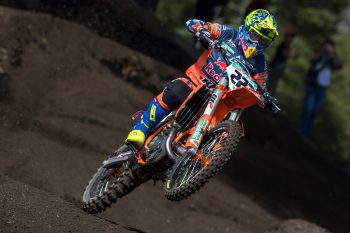 Enduring a technical problem in qualifying at Argentina’s opening round of the 2019 MXGP World Championship wasn’t a concern for Antonio Cairoli, as he bounced back on Sunday for two race victories and the overall.

The issue ultimately forced him to retire from Saturday’s heat race, granting him 28th gate pick for both of Sunday’s outings. Despite the poor gate choice, the Red Bull KTM Factory Racing rider managed to string together two strong starts before sealing victory.

“I’m really happy about this race because we unfortunately had a problem yesterday and on this track the start is really important because there is not much difference between the riders and the lap-times,” the nine-time world champion explained.

“I did my best to get to the front both times and it worked – I was in the top ten and could manage to work my way through. It was a nice race and nice event. So many fans, it is like being in Italy for me!”

The Italian ace was joined on the podium by Tim Gajser (Honda HRC) and Jeremy van Horebeek (Honda SR Motoblouz). The next stop on the MXGP calendar is scheduled for 24 March at Matterley basin in Great Britain.