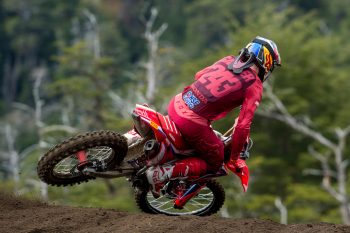 Tim Gajser says discovering his flow in the final outing of Argentina’s opening round of the 2019 MXGP World Championship enabled him to enjoy his time out on-track.

“I’m really happy to start the season strongly with a podium, and to feel really good on the track,” said Gajser. “In the first race I didn’t get the best of starts and it took me a couple of laps to find a good rhythm and to find the nice lines but once I did that, I passed a lot of the guys in front of me and finished in second.

“That was a great way to start the season off. Then in second moto, it was even better as I almost took the holeshot and I led for a lap but I was riding tight and not enjoying my riding so Romain (Febvre) and Toni (Cairoli) passed me. After this, I found my rhythm and found the flow around the track and was able to move into second and just start enjoying riding again.

“Two second places is a good start to the season and I’m really looking forward to the next races. A big thanks to the whole team around me, who help me out and put together this amazing CRF450RW.”

Team Honda HRC manager Marcus Pereira de Freitas spoke positively of the Slovenian’s efforts, commending him for positioning himself strongly in the title hunt in just the initial stages.

“It was great to see Tim lead the qualifying race and part of the second moto today, and to just see him riding to his true potential,” Pereira de Freitas. “Already he showed that the Honda CRF450RW is very fast out of the gate and has the speed to lead the best riders in the world, and to leave here in the championship hunt is exactly what we hoped after the first round.”

The 19-stop series heads to Matterley Basin in Great Britain for round two, scheduled on 24 March.