The domestic pre-season is in full-swing ahead of the Pirelli MX Nationals, as a host of top-level racers were in action over the weekend between New Zealand, New South Wales and Queensland. Welcome to Motoview on MotoOnline.com.au, presented by Thor MX Australia.

As reported already, New Zealand’s second round at Rotorua saw Kirk Gibbs ride to victory for Altherm JCR Yamaha and he’s now tied with Kiwi Cody Cooper in the MX1 points. In MX2 it was Wilson Todd who rode to the overall, while Kyle Webster debuted across the Tasman with a win in moto one and took second overall.

Closer to home, Appin’s first ‘King of MX’ qualifier for 2019 attracted a number of national racers since it was a rare opportunity to sample the pro track at the popular Sydney venue. In the end, CDR Yamaha Monster Energy signing Luke Clout topped MX1, leading final moto winner Hayden Mellross in his Raceline KTM debut. Raceline teammates Jy Roberts and Regan Duffy traded race wins in MX2, as Roberts won two motos for the overall and will be a serious title threat this season. Third was local Rhys Budd, who has been signed to Penrite CRF Honda Racing alongside Webster for this year. It was surprising we didn’t see more of the national riders there though.

What all this does is sets up an interesting opening round of the nationals next month, with a host of riders due to be in the mix when the gates drop. That’s it from me for this week, here’s Jeremy with more…

Wow, just how crazy was Arlington’s Monster Energy AMA Supercross Championship main event? While Ken Roczen (Team Honda HRC) looked destined for his first win of the season – and his first since that devastating arm injury in 2017 – it was all taken away from him by just a slender 0.028s after Cooper Webb (Red Bull KTM Factory Racing) laid down a last corner pass.

The race itself has etched its way into history books, becoming the closest finish in an AMA Supercross main event (in the modern era, at least). The last time a race finish was that tight? Well, it doesn’t come close, but it was between Trey Canard and Ryan Dungey at Houston in 2011, the gap being 0.186s to Canard’s advantage. 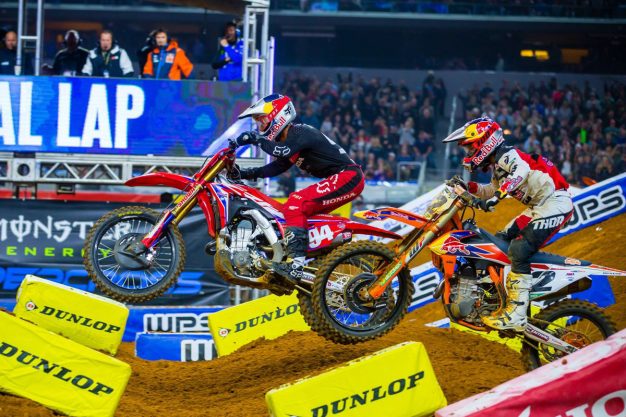 The racing this year has been unbelievable, and I don’t think anyone could’ve anticipated it. We always talk about how competitive the field is, but usually by this point of the series – seven rounds in – everyone seems to settle into position and the one or two title favourites are clearly established.

As round eight looms this weekend in Detroit, there’s simply no clear indication of who could take out the crown. Webb leads the series with four wins to his name, but only just – Roczen is just points behind, Marvin Musquin (Red Bull KTM Factory Racing) is a further four points shy of second, while Eli Tomac (Monster Energy Kawasaki) rounds out the top four 10 markers behind the Frenchman.

Speaking of Webb, what a pleasant surprise he’s been this season! To be completely honest, I didn’t even factor him into the championship equation before the championship commenced last month, especially after two lacklustre years in the premier class.

It’s amazing what a change of scenery can do for a rider, and it’s worked out in the favour of both his team, Red Bull KTM Factory Racing, and himself. The question is, can he maintain the incredible form he’s currently carrying? I think he can, but it’s going to be tough fight with a confidence-building Roczen and an ever-consistent Musquin right behind.