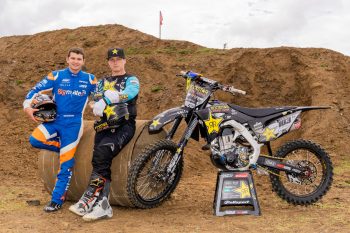 The adrenalin-filled Moto X Step Up competition will make its Australian debut at the 2019 Superloop Adelaide 500, adding to what is already an action-packed event.

The unique motocross competition attracts adrenalin-seekers from all over the world and sees competitors attempt to jump a bar as high as 55 feet.

Presented by New Holland, the international rider line-up includes Australia’s own Corey Creed who will compete in his first ever Moto X Step Up competition at the Superloop Adelaide 500.

To prepare, the X Games silver medallist and Nitro World Games Quarter Pipe Gold Medallist, has built his own prototype Step Up jump at his training ground in the Gold Coast.

“It’s going to be fun going up against the best in the world but I’m going to give myself the best chance to win,” Creed said.

“The opportunity to compete in Adelaide for the first time is exciting – can’t wait to get to Adelaide and put on a show for all the fans.”

The young-gun will take on some of the world’s biggest names in Moto X Step Up including fellow Australian Jarryd McNeil, who returns to compete in Australia off the back of two gold-medal winning performances at the 2018 X-Games in Minneapolis, USA.

“I’m thrilled to be taking part in the first ever Moto X Step Up competition in Australia and I’m even more excited to perform in front of a home crowd in Adelaide,” McNeil said.

“To have the chance to show off this cool discipline in front of so many Aussie fans at the Superloop Adelaide 500 really is a dream come true.

“It’s a competitive field with a number of international riders, so I look forward to the challenge that it brings. I’m really looking forward to competing against international and domestic riders.”

The Moto X Step Up presented by New Holland will be positioned between the City of Adelaide Family Zone and the recently relocated concert precinct, creating a dynamic centrepiece for all event goers.

Superloop Adelaide 500 General Manager, Alistair MacDonald is excited to announce the arrival of the Moto X Step Up competition in Australia for the first time.

“The Superloop Adelaide 500 is an event that strives to bring new initiatives to the fans, and we feel that once again we have achieved this,” he said.

“Last year fans embraced the Split Rhythm competition and we hope this success will repeat itself once again with Moto X Step Up.

“With a prize pool of over $40,000, there’s a lot at stake for the competitors, which will only translate to a highly competitive event.”

Joining Aussies Creed and McNeil in Adelaide is an array of international competitors including American Colby Raha (2017 X-Games Gold Medallist) who spoke of the significance of taking the competition to Australia.

“I’m stoked to compete in the Step Up competition in Adelaide with the Aussies,” he said.

“It’s cool to see how big the industry has become in Australia over the years and the level of riders coming from there.

“Now, coming off a third in Step Up at the last X-Games, I’m ready to go again! It’s time to go big!”

Similar to high jump, Moto X Step Up will see the bar increase in height, beginning at 36 feet and sometimes reaching 55 feet in order to secure eliminations. If a rider is unsuccessful in their two attempts they are eliminated. The winner is declared when one rider remains.

The high drama thrills will be spread across multiple elimination stages over the four-day event, kicking off on February 28.

The Superloop Adelaide 500 event will take place at the Victoria Park Street Circuit from February 28 through to the March 3.