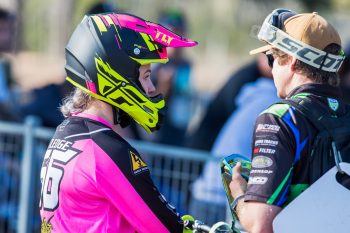 Rutledge previously contested the series in 2013 and 2014, finishing up with vice champion honours on both occasions before a thumb injury derailed her career during the 2015 season.

With the support of Kawasaki Europe and BUD Racing, the three-time Australian champion will target round one of the WMX, with hopes of a strong performance resulting in an invite to complete the five-stop series.

“It all came around randomly and unexpectedly,” Rutledge admitted to MotoOnline.com.au. “I had no intentions of going back to Europe – obviously I raced there in 2013 and 2014. During 2015 I suffered a pretty intense injury to my thumb, which pretty much put me out of competitive racing for three years.

“The start of 2018 was the first year I stepped onto a bike rode pain free, thanks to my local doctor. That brought my love for the sport back, and last year was a super successful year for me.

“I went down to Thredbo mountain bike riding during the off-season, and my partner Aaron said ‘why don’t we try and get back over there?’ – I just laughed at him and thought ‘like that’s going to happen’. I sent an email to just see what happens, and no more than a week later, I had an email from Kawasaki Europe that BUD Racing would take me on for round one of the world championship.”

The number 66 has been running multiple fundraising campaigns to assist with the associated costs of travelling to the 31 March event, which can be accessed through her Facebook page.

“The biggest thing that people don’t understand is that I don’t get any financial support,” she added. “I work five days a week as a personal trainer to cover my costs to go racing. I’ve had negative and positive comments from the fundraisers, but literally every cent made from them goes into racing.

“The first round itself is going to cost me pretty close to $10,000 to get over there. I actually just sold my car to fund this trip, so I’m without a car, but I’ve done what I’ve needed to do to give myself one last chance to show what I’ve got.”