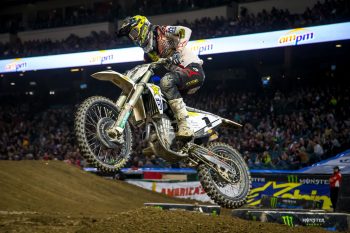 The number one plate holder is scheduled to undergo surgery today to repair two breaks in his left arm, while he also sustained a fractured rib in the fall.

“I am really bummed to have to say that I am out for an injury.” Anderson stated. “I was struggling to find my groove but had high hopes of pushing forward to the podium in all of the upcoming rounds. I will be back stronger. Thank you for the support.”

The Rockstar Energy Husqvarna Factory Racing rider is anticipating an eight-week recovery, however his return to racing will be determined as his injuries heal. It’s unclear if the factory Husqvarna outfit will draft in a fill-in rider, as both premier class contenders now sit on the sidelines after Zach Osborne suffered a collarbone injury at the beginning of the year.

Anderson’s title defence drew a mixed start, finishing a dismal 14th at the season-opener before featuring on the podium at Glendale, while his campaign at A2’s Triple Crown on Saturday saw him wind up ninth overall. He currently sits seventh in the championship standings.