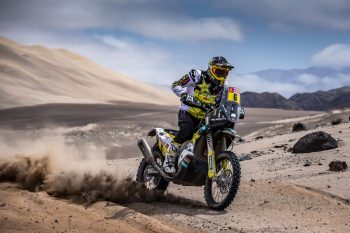 With the rally now past the halfway stage and heading back towards the host city of Lima, stage six covered some of the same ground as previous stages, boasting 838 kilometres in total distance including a 336-kilometre timed special.

Aussie Dakar rookie Ben Young (KTM) is now ranked 60th after finishing up 55th in the stage, while compatriots James Ferguson (KTM) and Rodney Faggotter (Yamalube Yamaha Rally) have been ruled out of the competition.

Stage seven of the 2019 Dakar Rally comprises the first looped timed special of the event, with riders covering 323 kilometres against the clock near the town of San Juan de Marcona.