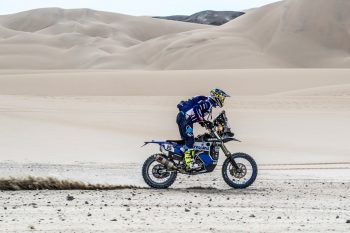 A technical issue on just the third stage of the 2019 Dakar Rally has resulted in a premature end to Rodney Faggotter’s campaign, forcing him to withdraw from the remainder of the event.

It’s understood the Australian suffered a problem in the dying stages of day after the last waypoint, leaving the experienced Yamalube Yamaha Rally rider with no chance of finishing the stage.

Ranked 16th in the 2018 edition, Faggotter was sitting a comfortable 28th in the overall classification at the conclusion of day two, with his assault all going to plan at that stage of the prestigious off-road race.