The WR450F has been around for 20 years now, so it’s only fitting that Yamaha has completely overhauled the motorcycle for 2019 – the best version of the off-road weapon yet! Yamaha has made a great effort to produce a ride that is tailor-made for Australian conditions and what Aussies want out of an off-road enduro bike. The 2019 Yamaha WR450F has host of new additions, which delivers a new level when it comes to the riding experience. Where we rode:
Off Road Advantage’s Josh Green was kind enough to have the launch of the 2019 Yamaha WR450F at his property in Stroud, New South Wales, which is practically heaven for any dirt bike rider. During the first day of riding we were treated to three tracks, including a grass track followed by some tight single trail, a large grass/motocross track and a six- to seven-minute single-trail loop. It was everything we needed to get familiar with the new WR, get photos and all the necessary press material. The following day was followed up with a 90-kilometre trail ride. The ability to have a bike launch in such in a variety of conditions and a longer trail ride really allows you to get comfortable with the bike and learn the bike’s intricacies. Technical features:
The 2019 Yamaha WR450F is closer to the YZ450F motocross entry than it ever has been. We have all been asking for it over the years and Yamaha has delivered. Josh Coppins, who needs no introduction, was a crucial test rider when it came to the development of the 2019 WR450F. The chassis is a new design, which is the same frame as the YZ450F with a few subtle changes for enduro riding purposes. The engine is also based upon the YZ450F, again with specific enduro settings so it’s better suited to riding and racing in the bush. New to the WR450F is the Yamaha Power Tuner App, which allows you to personalise the bike’s motor characteristics to track conditions via your smartphone. In addition to the tuning ability, the 2019 WR450F has an engine map switch mounted on the handle bars to switch between engine power delivery options while you’re riding. A new lightweight piston with an increased compression ratio of 12.8, along with higher lift cams rounds out the impressive engine package. The fuel-injection is now a Mikuni system, providing reduced weight and uses a smaller throttle position sensor and also now uses an open butterfly type cold start structure, moving away from the previous bypass type. Alongside these updates is a sleek new headlight cowl, forged aluminium side-stand, larger fuel tank, more protective bash-plate, lighter and tougher clutch, plus a new lightweight speed sensor and high-precision display. Gaining access to the air-filter is now easier and with less moving parts, because the previous model WR450F had the top of the tank shrouds incorporated into the top of the air-box cover, which was a little cumbersome. The 2019 Yamaha WR450F has just one fastener and is easier to gain access to without trying to line up tank shroud locator pins and the associated fasteners. The overall wet weight has been dropped by four kilograms, ergonomically it is narrower and it’s now lower in the back-end, which really makes the ride feel significantly lighter when you are pushing into corners and between the trees. The new WR450F relies on an electric start as Yamaha have removed the kick-starter completely to help save weight, while the handlebars have also been revised and the new speed sensor makes changing wheels easier in addition to saving weight and offering greater protection against damage out on the trails. Motor characteristics:
Engineers worked on making the 2019 Yamaha WR450F motor as linear and as usable for the rider as possible. The Yamaha 450 engine across both the WR and YZ range is known for having plenty of power with its reverse-slanted engine, so as you would imagine, the 2019 WR450F has all the power you could ever need but it’s a lot more usable and adaptable given the introduction of the mapping switch and tuning app. The ability to change between two different maps while you are out on the trail is a huge benefit, especially when adjusting from wide-open trail to tight single-track. The mapping switch makes the bike easier to ride depending on the conditions. Both maps can be easily dialled in via the wireless Yamaha Power Tuning App as well, so the ability to swap and change the characteristics of the motor brings another element to the riding experience. Being able to bench-race and talk to your buddy about what map they are using and what works for them is kind of cool, so then the ability to swap and share map settings with your friends is really neat, not only from a riding perspective, but just getting more out of the motorcycle. The new engine and starter system have helped to further centralise mass and it is noticeable when it comes to manoeuvrability. The clutch still remains as a cable actuation and is now smoother and has a lighter feel, which compliments the more positive wide-ratio transmission. The motor of the 2019 WR450F is just what you would expect, being hugely powerful, but surprisingly usable. In stock trim and with the latest ECU settings, the engine pulls hard and has power from the second you start sending the throttle south. It’s responsive and predictable, but you definitely have to respect it to make the most of the package. The best thing about the 2019 model is you can play with how the bike delivers that power and make it easier to ride, which comes as a clear benefit out on the trail – especially during longer stints. Chassis feedback:
The chassis of the 2019 WR450F has been overhauled completely. The WR450F now shares the same frame as the 2019 YZ450F, which features a straighter and more rigid tank rail, while having a wider and stronger swing-arm mount. This has improved stability and traction, also allowing for the mass to be centralised much better than the previous model. The ‘impact’ area of the frame has been expanded, which has meant the mounting brackets for the motor have also been moved to further improve on the bike’s performance. One of the characteristics of the WR450 and YZ450 over the last few years is that it seemed to be a little higher in the back than most bikes, however this is one of the areas Yamaha has corrected with the 2019 model and it is more balanced. From the minute you throw a leg over the 2019 edition, you can notice it’s lower in the rear. Surprisingly, the bike feels incredibly narrow, which is probably one of the things that I always took issue with the previous models. The 2019 WR450F is 18mm narrower than the 2018 model and goes a long way to make the bike feel smaller and lighter. Yamaha’s KYB SSS suspension has built a great reputation of being a solid package and this variant is no different. KYB has changed the internals slightly on the dual chamber spring forks, plus you’ll find a new KYB shock that is 350 grams lighter. On the trail, the suspension feels improved upon the previous year’s model and has improved handling – it’s much easier to get around tighter tracks and you can feel the weight reduction. The 2019 WR450F tips into corners much easier and doesn’t push as much as the previous generation WR450F. I found that pushing the forks through 5mm also helps get the front-end planted into ruts without affecting general stability. The suspension feels very stable and handles the rougher terrain well, handling the larger hits with ease. Final thoughts:
There isn’t a lot of change needed on this bike. The 2019 Yamaha WR450F comes really good right off the showroom floor. Besides the main things you do when you get a brand new bike like suspension set-up for your riding ability and style, maybe throwing an exhaust system on it and some different grips if you don’t like the sturdy stock grips, then there is no real need for change. The map settings that come standard are there to be fiddled and tinkered with, share different settings with your other mates with the same bike and really enjoy and get to know what the changes you make do to the performance of the bike. You can’t break the motor with the Yamaha Power Tuning App, but you can significantly change the performance of the engine with some minor tweaks. The 2019 Yamaha WR450F also comes with a competition kit, which includes a lightweight LED tail-light and licence plate holder, braided steel front brake line and a larger diameter exhaust muffler outlet, amongst a variety of offerings. Yamaha is known for its reliability and now, outright performance is right there to match. 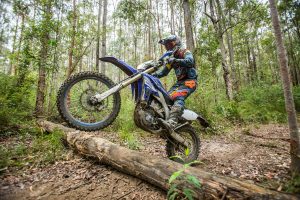 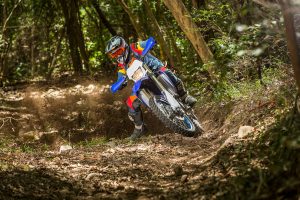 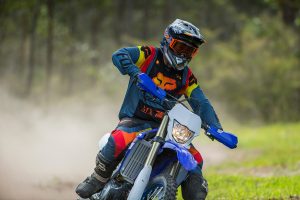 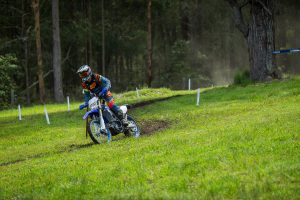 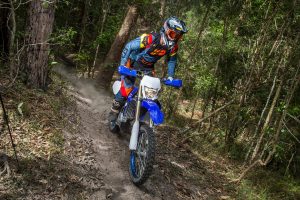 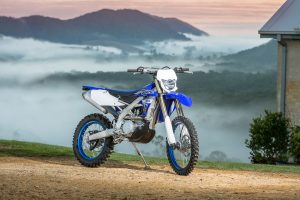 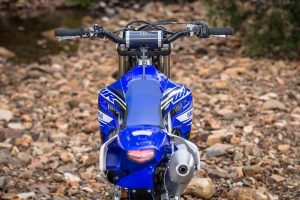