Q&A: Hits and misses from A1

Who did and didn't hit the mark at the American Supercross opener.

It doesn’t get much more exciting than Anaheim’s opening round of the Monster Energy AMA Supercross Championship. Months of talk, speculation and anticipation build up over the off-season and are finally put to bed on the first Saturday night of January. This year’s edition didn’t disappoint, and as per usual, served up a few surprises in what was a rain-soaked affair. In this instalment of Q&A, we answer burning questions of who did and didn’t hit the mark at A1. Q: What happened to Jason Anderson?

A: It was a rough night for the defending champion, and not because of incidents or technical issues. Simply, and admittedly from the number one himself, he experienced an off night and could only muster up 14th place. It’s far from what anyone expected, but A1 can pull out some unusual performances from the best of riders, so we’re anticipating the factory Husqvarna ace will snap back to his regular self for round two this weekend.

Q: There’s been lots of talk of Dean Wilson and his self-operated program, did he put up a fight against the factory riders?

A: He sure did! In fact, the popular number 15 took the field by surprise when led 15 minutes of the main event. Unfortunately, he was overcome by eventual winner Justin Barcia (Monster Energy Yamaha) and Ken Roczen (Honda HRC), before being passed by Eli Tomac (Monster Energy Kawasaki) on the final lap to edge him out of the podium. Still, it’s a promising sign for Wilson, who hasn’t led a race like that in a number of years.

Q: The field is so stacked, which riders hit the mark?

A: While it shouldn’t, Barcia’s victory was one of the bigger surprises, but that’s mainly because he hasn’t captured a main event victory since 2013! As noted, Wilson’s performance was strong, as was Malcolm Stewart (Smarttop Bull Frog MotoConcepts Honda), who held down second for much of the encounter before dropping to seventh. Mentions must also be given to Cooper Webb (Red Bull KTM Factory Racing) and rookie Aaron Plessinger (Monster Energy Yamaha) finishing in fifth and sixth respectively. And we can’t forget stellar showings from podium placers Roczen and Tomac. 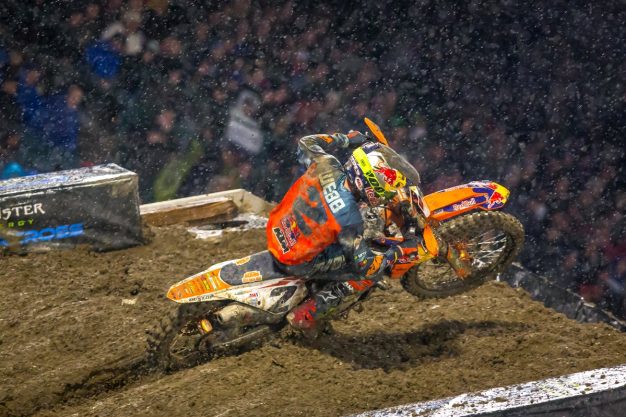 Q: And which riders missed the mark?

A: Anderson’s 14th comes to mind, as does title contender Marvin Musquin’s (Red Bull KTM Factory Racing) eighth – the Frenchman suffered a knee injury in the off-season and is understood to have missed considerable time on the bike. Along with the two favourites, we anticipated more from three-time AUS Supercross champion Justin Brayton (Smarttop Bull Frog MotoConcepts Honda) in 11th, along with rookies Justin Hill (JGRMX Yoshimura Suzuki Factory Racing) and Joey Savatgy (Monster Energy Kawasaki) in 15th and 16th respectively. It’s only early days though!

Q: How did Reed stack up?

A:It wasn’t ideal for the two-time premier class champion to transfer to the main via the LCQ, but he did comment post-race stating the additional track time offered him insight to the rain-soaked conditions that later unfolded. Charging from the rear of the field, the JGRMX Yoshimura Suzuki Factory Racing ace wound up in ninth, which is a respectable start to the series for the 36-year-old.

Q: Anything notable from the 250SX West class?

A: The 250SX division is never short of surprises. At A1, Colt Nichols broke through for his maiden main event victory in what was a Monster Energy Yamalube Yamaha Star Racing 1-2, as Dylan Ferrandis was second. A heated rivalry is already brewing between RJ Hampshire (Geico Honda) and Adam Cianciarulo (Pro Circuit Monster Energy Kawasaki), the duo battling aggressively before the latter was taken down in the fight for position. We can’t wait to see how this class shapes up!