Plans in place for 2019 MX Nationals assault confirms the Queenslander. 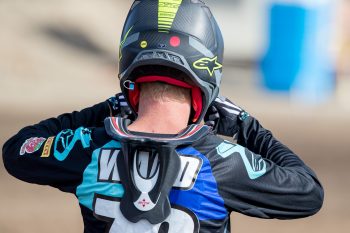 A heavy fall at the 2018 Honda SummerCross in New Zealand has ultimately forced Australian talent Caleb Ward to undergo surgery, which will see the fourth and fifth metacarpal repaired in his left hand this Wednesday.

The Queenslander was making a guest appearance at the event with CML KTM Racing, earning 5-3 results in first two outings before crashing out of proceedings.

Ward downplayed the injury and is confident he’ll return to riding next month, which will leave him adequate time to be prepared for the opening round of the 2019 Pirelli MX Nationals, scheduled for 17 March at Appin in New South Wales.

“I’m actually in Brisbane at the moment, and I’m set to undergo surgery on Wednesday to fix my hand up,” Ward revealed to MotoOnline.com.au. “I’ve got a couple of broken bones in there – I think they’re going to chuck some wire in to hold it together, so it will just be the standard six weeks [of recovery] and I should be all good.”

The 21-year-old shone in 2018 in what was his rookie season contesting the premier class, and despite being tight-lipped on his plans, a contract is waiting to be imminently signed that will see him supported for the 10-round series.

“I still have to sign some stuff,” he added. “I have a fair idea of what I’m doing, I just haven’t signed the contract yet. It’s basically a done deal and I’ve got plans in place. I’m 99.9 percent sure I’ll still be on a 450 – hopefully I can have a crack and see how I go trying for a title this year.”

The number 79 wound up fourth in last year’s championship standings, earning overall podiums at the final two rounds of the series.