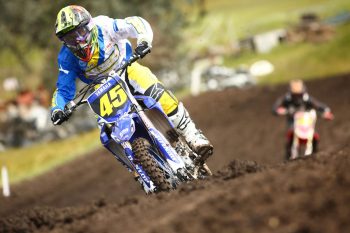 It’s a tall order, but the WBR Yamaha team will be out to match their 2018 success that saw them claim the top two spots in the MXD class at the MX Nationals, with an all new and talented line up for 2019.

The in-coming riders of Max Purvis and Jack Kukas will form the team for 2019 and the WBR Yamaha team will also reveal a new look when they roll into round one of the MX Nationals with their new purpose built transporter.

Purvis, who hails from New Zealand, was third in the MXD class in 2018 at the MX Nationals riding as a Yamaha privateer. Highlighted with four round wins, Purvis proved he had the speed to match it with anyone in the class but is now focessed on moving up the podium in 2019 and determined to make every post a winner.

Again his year will start in New Zealand where he will contest the MX2 class with the JCR Yamaha team before coming over to Australia and getting his campaign started at the MX Nationals. This is the final year for Purvis in the MXD category and knows what it takes to get to the top of the podium.

“I have done two seasons in Australia now and I feel comfortable racing here now as I know the riders and how the events work,” Purvis said. “But, it’s also the first time I have had major support over here and its cool to be a part of the WBR Yamaha. I had to race against them in 2018 and I know how well prepared and organised they were so it’s exciting to now be on the same side as them.

“I won plenty of rounds last year, but I just wasn’t consistent enough in the rounds that I didn’t win so that’s an area I need to address this year. Championships are won on your bad days, so I need to find a way grind out a good result when things aren’t going my way and be consistent across all 10 rounds.

“I love racing in Australia and the MX Nationals is a great series. Doing the NZ Nationals, the MX Nationals and the Australian Supercross Championship will be a huge year for me, but I can’t wait to get started,” Purvis ends.

Competing in his first MX Nationals series will be Queensland based racer, Jack Kukas. 18 year old Kukas last raced in Australia in 2017, when he finished third in the 15 years divisions at the Australian Junior Motocross Championship then he jetted out to the US to spend the 2018 season at a motocross training facility developing his race craft and technique.

Now back in Australia and focused on the year ahead, Kukas will be experiencing the tracks and the formats for the first time but his US experience will hold him in good stead. Add to that to his impressive hard work ethic and aggressive riding technique, Kukas will be in the championship as the season progresses.

“It’s awesome to be back here in Australia and on the WBR Yamaha team for the 2019 season,” Kukas enthuses. “I have been a Yamaha rider all my life to so get the opportunity to ride for the official Yamaha MXD team is a bit of a dream come true.

“I have already spent a week down with the team in Echuca just getting settled on the bike and meeting everyone. Travis and Nathan are awesome to deal with and are so helpful in getting me comfortable on and off the bike. I can’t thank them enough for giving me this chance and I hope to repay them with some good results.

“The 2019 YZ250F is such a good bike and we have a great group of sponsors on board for next year so I’m going to give it my all and try and get another championship for Yamaha and the WBR team,” Kukas said.

The first time both riders will be on track together will be the opening round of the MX Nationals at Appin, west of Sydney, on March 17.