Reed, 36, won all three finals in the SX1 main event to steal the title from previous leader, Scotsman Dean Wilson (DPH Motorsports Husqvarna) in the final race of the Triple Crown format.

It was a fitting return to NZ for Reed aboard the JGRMX Suzuki RM-Z450, untouched in technical conditions in front of a 20,000 strong crowd at Mt Smart Stadium.

Reed’s trio of wins handed him the Oceania championship round two win from an ecstatic DPH’s Hayden Mellross – riding an FC 350 – and a disappointed Wilson. He notched up a brace of runner-up positions to a fast-starting, hard-charging Reed in the first two SX1 finals, but experienced clutch problems in the third race.

“My clutch was getting hot going into that final race, but if there’s someone who’s harder on clutches than me it’s Dean,” Reed told Motoonline afterward. “I saw him on the starting line having issues with it before that final race, but you never really know what’s going to happen out there on the track.

“I told myself to take it easy, but Brayton was putting it on me, and we put in the best laps of the night in that final race. As an Australasian guy I’m really proud to win the first FIM Oceania Supercross Championship.” KTM Motocross Racing Team duo Dakota Alix and Ryan Marmont – out of retirement and riding a 250 SX – went 1-2 in the SX2 class, with Kiwi Josiah Natzke (Cannon Signage Honda) completing the podium, despite it being his first supercross race in years.

The trio were several steps ahead of the rest of the field all evening, holding down the top three positions through their heat earlier in the event.

More than 20mm of heavy rain fell on the Mt Smart stadium venue in the lead-up to the night show, forcing race officials to put in a huge amount of work to ensure the track was able to sustain a full evening of racing. 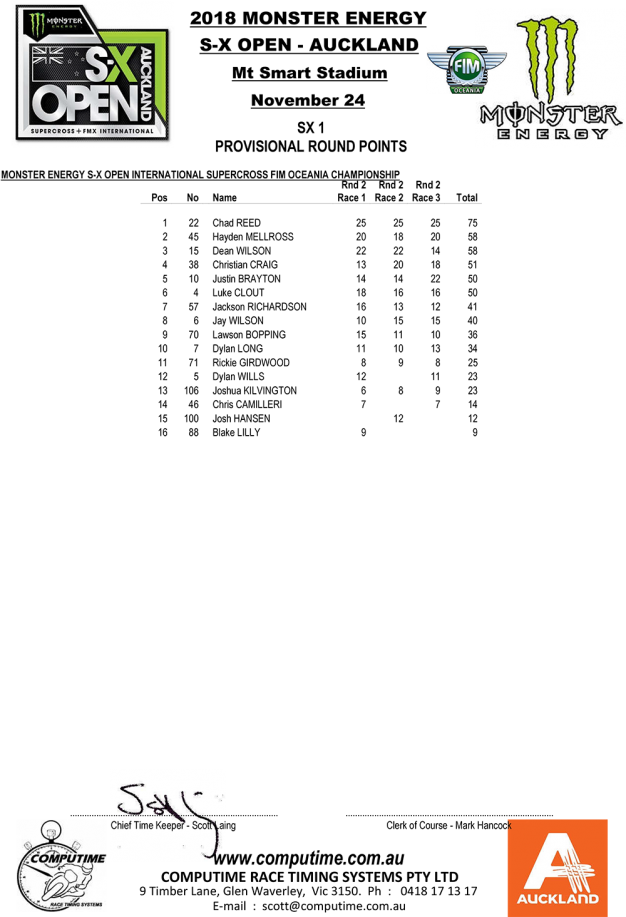