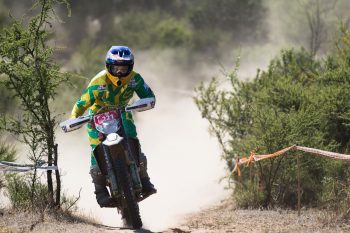 After a strong season that saw him dominate the E2 class in Australia, ‘Chucky’ Sanders stepped up to the Husqvarna FE 501 for the ISDE. It was the second time this year that he’s ridden the larger-capacity bike, previously storming to the Hattah Desert Race win in July.

Sanders came out firing as the ISDE commenced to lead the E3 category following day one, quickly adapting to the dry conditions. From there he settled into second in class and third overall, where he would remain when the event concluded with the final moto on Saturday. Also including US-based factory Husqvarna rider Josh Strang, Team Australia rallied to a spectacular World Trophy win.

The result could have been even higher for Higlett, however a fall in the final moto dropped him down the order a number of positions to conclude his debut.

Team Australia also captured the Women’s World Trophy honours for an astonishing sixth-straight time, led by American champion Tayla Jones as she rode to the individual victory by near three minutes riding a Husqvarna FC 250.

Glenn Kearney – Motorsports Manager, Husqvarna Motorcycles Australia: “It was an exceptional week of riding from Chucky. He came out swinging on the first day and led E3 ahead of Daniel Milner, which was really impressive in his first ride on the Husqvarna FE 501. After riding a 450c in the off-roads, he’d ridden the bike at Hattah and really enjoyed it, so he opted for more horsepower when we expected sandier conditions in Chile and it suited him well. He managed to stay up at the front throughout the six days, eventually finishing second in class and third overall, which was a huge part of Team Australia achieving the World Trophy win. We were also really happy with Fraser’s performance in his first ISDE, it’s a big event to take on and he did really well. He got faster as the week went on in E1, but unfortunately for him he had a big crash in the final moto and damaged the fuel line, so he actually had to push the bike across the finish. That cost him a few positions in class, but anyway, we’re sure he learned a lot this week. Well done to everybody in Team Australia, it was a massive result for everybody
and our congratulations go to them all.”

Daniel Sanders – Husqvarna FE 501: “It was a good week for me. I had a few small mistakes here and there during the week, but I am really happy with my speed. This was my first enduro race on the big Husqvarna FE 501 and I’m more than happy with the way it performed all week long. I really enjoyed racing the big bike in Chile. Conditions were tricky with the dust and the last lap of every day seemed like the most challenging one. With the heat coming through, your heart rate is also going up and you need to be strong physically to keep pushing.”