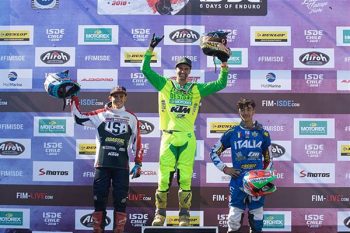 KTM Enduro Racing Team’s Milner was unstoppable in dry, technical conditions against the best off-road racers on the planet, establishing himself as the class of the field on his way to winning aboard the KTM 500 EXC-F.

Milner was third outright on the opening day and then topped day two, which boosted him to second on the progressive time-sheets while also taking control of the E3 category at that point. By the halfway point following day three, another commanding performance saw Milner take charge of the lead on combined times.

After again leading the way on days four and five, Milner carried a 1m27.62s lead into Saturday’s final moto, in which rode to a calculated eighth-place result and extended his final advantage to 1m54.48s as a result. In E3 he won by over two minutes to cap-off an incredible achievement.

Fellow KTM Enduro Racing Team regular Lyndon Snodgrass was unfortunately put out of contention early, albeit still being a valuable part of Team Australia’s World Trophy efforts. Riding the KTM 250 EXC-F in E1, he was sixth in class on day one, however human error in the pit caused a loose sump-plug to fall out on day two and rule him out of the event altogether.

KTM Australia also supported the Women’s World Trophy team through ISDE debutant Mackenzie Tricker as they captured a sixth-straight victory. Individually, US-based Tricker was ninth aboard her KTM 250 SX-F. The Junior World Trophy team from Australia collected fifth overall for the week, including KTM-mounted Tom Mason, who rode his KTM 500 EXC-F to 16th position in class.

Glenn Kearney – Motorsports Manager, KTM Australia: “It was an unbelievable performance from Milner. He’s shown all year here with solid results, battling with Daniel Sanders, and we’ve said a number of times that it seems these guys are up there with the fastest off-road riders in the world at the minute. The proof’s in these results with the team winning the World Trophy and how well Daniel performed – the KTM 500 EXC-F was flawless and he was exceptional in winning so many tests. Individually, to win the overall is something that hasn’t been done by Australians very often and to lead Team Australia to victory was a massive result as well. Unfortunately for Lyndon after having a really strong first day, it’s really hectic at the ISDE during those work periods and there was a miscommunication that led to the sump-plug not being tightened properly. As a result, that fell out on day two, he lost oil and it was game-over, but to his credit he helped the team and did all he could for the result in the end. We’re really proud of everybody associated with KTM Australia and congratulate all from Team Australia on their incredible results.”

Daniel Milner – KTM 500 EXC-F: “It’s been an awesome six days – I couldn’t be happier with the riding and my result. Of course, I came here wanting to win, but I think the secret has been just worrying about my own riding and not what everyone else has been doing. I have been fully focused on taking each test as it comes and getting through each one fast, but clean. I eased off a little on day five and actually started making more mistakes. That can be the case sometimes, you need to get yourself into a good rhythm and stick to it. For the team to win the World Trophy again is incredible. We knew we would be under a lot of pressure, especially from the USA team, but all the boys have ridden really well and done a great job. Thanks to everyone that got us here, it’s nice to be able to reward them with this result.”