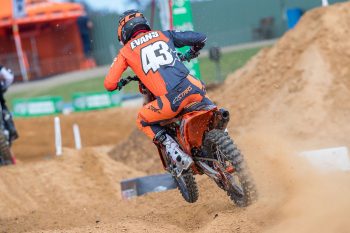 Outdoor revelation Mitch Evans will skip this weekend’s final round of the 2018 Australian Supercross Championship in Sydney.

Evans, 19, won’t be in action at the Monster Energy AUS-X Open Sydney despite declaring he is 100 percent fit and had been preparing for the international event.

Although details remain scarce, speculation mounting at Qudos Bank Arena suggest Evans will now part ways with Raceline KTM after it was initially expected he would stay-put for 2019. It’s a major development in KTM’s plans for next season, with Raceline widely being tipped to be taking over factory duties from next year.

Representatives from the Raceline team and KTM Australia declined to comment when contacted this week, while attempts to contact Evans have been unsuccessful. He will be in attendance on the sidelines this weekend, according to a brief statement made via social media.

One major rumour surfacing since his announcement that he will miss Sydney is that Evans will instead embark on a European career from next year, linked to a full-time MX2 World Championship seat as the local silly season moves into overdrive.

Evans had a phenomenal outdoor season on debut in MX1 this year, finishing second behind triple champion Dean Ferris in the Pirelli MX Nationals and then going on to claim fourth overall as part of Team Australia in the Motocross of Nations (MXoN).

Remaining committed to representing Australia alongside Hunter Lawrence and Kirk Gibbs at RedBud, Evans missed the opening the three rounds of supercross but returned at Port Adelaide’s penultimate round, finishing a promising sixth overall.