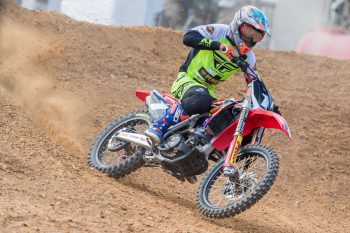 The short and exciting Australian Supercross Championship blasted through Adelaide and will reach Sydney in less than two weeks for the final round of the season.

Penrite-Pirelli CRF Honda Racing riders Kyle Webster and Jackson Richardson continued to battle it out in the highly contested SX2 class in Adelaide on 20 th October and plan for a strong finish in Sydney.

The 3-race final format this season has been exciting for spectators and at times challenging for riders, proving consistently strong starts are the key to taking home a win.

In Adelaide, Webster pushed his VP fuelled CRF250R to the front of the pack in the first final, where he battled for 4 of the 8 laps with the lead riders. With a strong start he stayed up front but unfortunately, a small error caused him to crash, suffer some small injuries and lose his position.

Rattled and slightly bruised, Webster was unable to put consistent laps together for the following two finals and all though he showed some strong speed, it did not translate to a strong finish.

“I’m pretty bummed about my results in Adelaide. I had another great lead up to this event, finally got a holeshot but made some stupid errors, which cost me greatly. The bike set up is great so I hope to give it my all at the final round in Sydney,” said a solemn Webster.

Richardson looked strong all event, taking P2 in free practice, he looked set for a top night. A race incident in his heat race with Dakota Alix from the USA meant he had to fight it out in the LCQ to grab one of the final four gate selections for the finals.

The current Australian Supercross Champion fought hard in the three finals working his way through the pack in all of the short races securing himself with a 9-5-5 for a P7 overall.

“I felt good tonight. We had a great set up, my Honda was strong and I went into the event with the best confidence I’ve had all season.

Regrettably, I did not get a great gate for the finals due to the heat race incident so I had to work hard through the field each race. I’ll take that home and get ready for the final round in Sydney,” stated Richardson.

As the year comes to a close, the team will pull together to finish the season with a strong result at the final round at Homebush on November 10.

Team principal Mark Luksich is enthused about the season and very motivated to put all in place for 2019.

“I’m proud of the team and we continue to improve. My riders are determined to give us a strong finish at Homebush and I’m already getting excited about 2019. We’ll have lots to announce over the next few weeks,” stated Luksich.