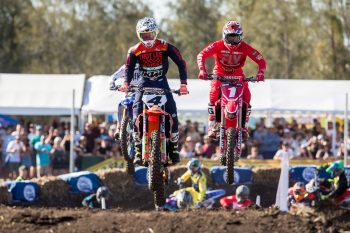 Clout was incredibly impressive at Jimboomba’s opener, finishing third after dicing his way through the field due to a first turn crash, making a number of critical passes on championship contenders in the process.

The inspiring ride has promoted confidence within the talented New South Welshman, who’s discovered another level in his riding since round one.

“I’ll just need to get a good start and be with him,” Clout commented. “[Brayton’s] a really good rider who seems to step it up when you think you’re getting closer to him. I think I can definitely stay with Justin, it will be another thing to beat him but I think it’s realistic to be there and fight with him for 20-laps and take it to him cleanly.

“I feel like I’m riding a lot better than I was at Jimboomba – I feel like I’ve picked it up again. I’m really happy with how I’m going with my fitness and how everything with the team is going. So yeah, [I’m] just really excited to go back racing.”

Round two of the Australian Supercross Championship will see daytime schedule hosted for the second time in as many rounds, with opening ceremonies set to commence at 2:30pm AEST.