It was an incredible start to Justin Brayton’s Australian Supercross Championship defence at Jimboomba’s opening round as he dominated the night, claiming pole position before capturing victory in his heat race and the SX1 main event. MotoOnline.com.au tracked down the Penrite Honda Racing rider to gather his thoughts on the night. 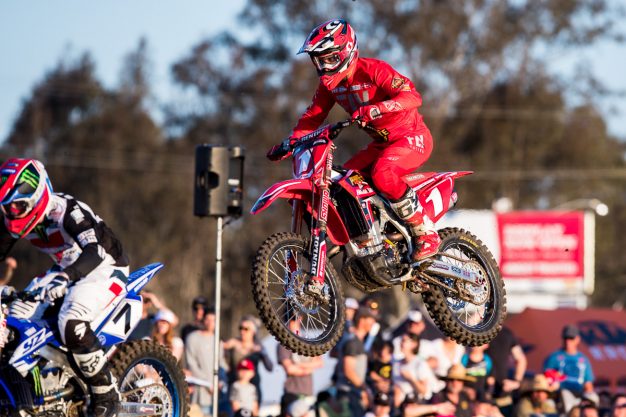 A great win tonight, you’ve got to be pleased to kick off your campaign like that…

Yeah, that was good. The first round is always tricky because you come in with a bit of extra nerves, especially going for my third title in a row – I know the target is on my back. I was definitely nervous coming into the day, but I exectued perfectly with fastest lap in qualifying, heat win and the main event win. You just had to really manage the track – if you over-rode it, you could push the front and fall down. I’m happy with how I rode and with how I managed the day.

Do you feel as if the competition has closed the gap to you or tightened up?

I don’t really think so. The biggest thing is the tracks – the tracks only allow you to go a certain speed – there’s definitely a cap on how fast you can go. I like that because it brings everyone closer, it works my race craft and the racing is so much closer. As a fan, that’s awesome, as a rider, I’d rather it be really gnarly and technical like we have in the states. It’s good for me to have close racing and to be pushed. I can’t just cruise, especially with Metty being so fast. I’m bummed for Dean [Ferris] – I know he was coming in fit and it would’ve been fun to battle with him. It’s disappointing to lose him, but I hope he’s alright. You mentioned managing the track – it really formed up differently today compared to previous years, and it looked quite brutal towards the end…

You can only go so fast with the dirt being dry – the track crew did an amazing job to keep moisture in it all day. It was nice and warm today, so they still did a god job and there were some ruts. The sun played a factor because you couldn’t see in a couple of turns, so when I say I’m proud of myself, I’m proud of not trying to push that limit to try and win by 10 seconds, and more just getting into the lead and managing where Metty was. I’m happy with the day, for sure.

From what I understand, your wife got sick when you arrived in Australia. Did she make it out tonight to watch?

No, she didn’t. We’ve had a really rough week and a half since we got here – we were in the hospital for a couple of days because my wife got pneumonia and now my son is running a high temperature – so it’s been pretty stressful and it’s been weighing on my mind all day. I had to leave them at home, but I’m glad to be going to see them now and bring my daughter a trophy – before I left she said make sure you bring me home a trophy [laughs]. So I’m glad I came through!

So I guess the next few weeks before Coolum will just be settling in then?

For sure, yeah. We’ll get settled in and start to ride and train – I didn’t ride for 10 days and only had a couple of days on the bike this week. That didn’t help today with not riding much, but we’ll get settled in now. I picked up a Specialized bicycle at the end of last week, so I’ll get back into my program and ride some more in the next couple of weeks.