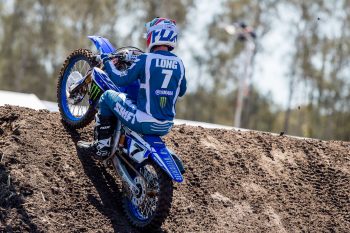 It was a day of highs and lows for Yamaha Race teams at the opening round of the Australian Supercross Championship, highlighted with an impressive performance by Jay Wilson to win the SX2 main event but soured by the injury to CDR Yamaha Monster Energy Team’s Dean Ferris who will be sidelined for some time after a nasty fall on the weekend.

The Ferris injury came in the opening laps of the SX1 (450cc) heat race where he miscued a tricky jump section and fell awkwardly from his bike. He lay motionless on the side of the track as the RACESAFE team scrambled to get to the downed rider. Ferris was then taken from the track to Hospital to treat his injuries.

At this stage, Ferris has been taken from ICU into a regular ward where they are continuing to monitor his lungs and his head. Dean was concussed in the fall as well as his lungs taking a heavy hit that has doctors concerned. Doctors are confident of a full recovery but say both injuries will take time as there is no date on a return to racing at this early stage.

To view a bLU cRU round recall : https://youtu.be/emmp4PGdHTc

CDR Yamaha Monster Energy Team – Craig Dack – SX1
“It has been a while since we as a team have had to deal with a serious injury so we are all a bit shocked by what happened on the weekend. Dean was riding exceptionally well in the lead up to the event as well as in the morning sessions so both for him and us it is extremely disappointing that he fell in the first heat race.

“Only Dean could really describe what happened but he obviously took a pretty big hit to his head and lungs when he fell and didn’t move at all, which scared us all. At least with RACESAFE in attendance we know he is in the best possible hands and they have been amazing in keeping us up to date with everything that has happened.

“We have no timeline on his return to racing, but we will remain focused on assisting him for a full recovery and hope to see him back on his feet and 100% healthy as soon as possible.

“For Dylan, he struggled to find his mojo in the final. Like Dean, his preparation leading up to round one was very good and we also found some good gains in the bike, but he just needs to put it all together on race day. I’m sure he can improve on his sixth place from here.”

Serco Yamaha – Gavin Eales – SX2
“I think it was a positive start from us but it didn’t really reflect it in the final results. Both riders showed they have good track speed and they need to turn that into good results in a short five round series to have a chance at winning this championship.

“Jacob will be much better for the ride after getting a handle on how things operate in Australia and picking up the race day vibe of the team. He has settled in well and know that he knows what to expect both from the tracks and the opposition riders, I think he will be much improved at round two.

“Wilson just made a couple of errors at important times during the final that set him back. He looked great on the track all day but just lost his flow in the opening lap chaos and then when he fell at the half way stage, he was never going to get back to the front with only seven laps to go.

“But I have confidence in both riders to bounce back at round two and we don’t need to reinvent the wheel. If both riders can put themselves in good positions early in the final, I’m sure they are capable of winning races.”

Yamalube Yamaha Racing – Scott Bishop – SX2
“The opening round went really well for us and both riders enjoyed a good day at the office but both for very different reasons. Jay proved to be very consistent all day and when he got to the lead in the SX2 final, he was able to maintain his calmness, click off his laps and slowly pull away from the field as he was ruthless in his lap times. He thoroughly deserved his win and had to earn it as the SX2 class has plenty of high quality riders, as well as a handful of US based riders here for this years’ championship.

“It was the prefect start to the series but come round two, we all start on zero again and have to maintain the same focus, energy and belief to achieve results like this. Jay has been around and knows this as well as anyone, so he will continue to work hard and be as prepared as possible for the coming rounds.

“For Richie, it was his first ever supercross race. Last year we had some injuries to our riders and Richie was a rider we looked at and even tried out to fill the vacant seat, but he acknowledged then he wasn’t prepared. Fast forward 12 months and he finishes eighth in his first race and was mixing it with all the established names in the class. He was nervous before the first heat but he proved he belongs, so it was great so see him pleased with himself after the final was over.”

WBR Yamaha – Travis Whitten – SX2
“With two young riders both still under 19 and in the MXD class in motocross, our role within Yamaha isn’t to win a race or championship but to develop riders for the teams above us so our expectations of both Bailey and Hugh are just make main events, continue to learn and improve and basically get a handle on supercross so when the step up occurs, they are ready and prepared.

“Hugh finished in 14th and Bailey in 15th in a pretty tough field that has plenty of international experience. I believe they can both do better and will do better at the coming rounds but round one is always tough and they both managed to get through safely and can continue to work hard for the coming rounds.