Fox and Taylor claim wins in junior categories at round one of AUS Supercross. 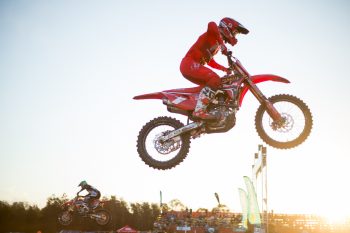 The number one plate holder capitalised on early mistakes from his rivals to cross the line a convincing 5.260s ahead of teammate Brett Metcalfe (Penrite Honda Racing).

After overtaking early leader Jace Owen (Complete Parts Kawasaki Racing), Metcalfe stormed into the lead and looked set for victory, however a stall moments later saw him relegated down the field and forced to regain positions.

In a spirited performance, Luke Clout (KTM Motocross Racing Team) closed out the 20-lap encounter in third despite a crash at turn one, displaying incredible form as he negotiated his way through the competitive class. Fellow American Josh Osby (Raceline Pirelli KTM) initially led the main until he was overcome by a charging Wilson, ultimately settling into third behind Taft at the conclusion of the race.

The Junior Lites division was taken out by Blake Fox (KTM) ahead of Jake Cuka (Yamaha) and Brandon Steel (KTM), as top honours in the 86cc class were awarded to Reid Taylor (Husqvarna) followed by Brad West (Kawasaki) and Jack Mather (KTM).

The Australian Supercross Championship will return to Queensland for round two at Coolum on the Sunshine Coast, scheduled for 6 October.