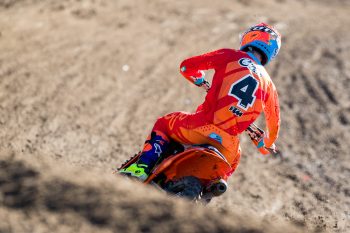 Luke Clout has declared his intentions for the approaching 2018 Australian Supercross Championship, stating he wants to feature on the podium week in, week out, during the five-stop series.

Jimboomba in Queensland will play host to the season-opening round this Saturday, and Clout his adamant his lead up aboard the 2019 KTM 450 SX-F prepared by the KTM Motocross Racing Team has granted him a positive feeling to star inside the top three.

“I’m definitely excited for supercross,” said Clout. “I’ve been riding now for a few weeks and I honestly felt comfortable on the 2019 KTM 450 SX-F straight away. The team gave me a good package that feels really positive, so even though my speed was strong last year, I feel like I’ll be a lot better this season and will be looking for some top results.

“Straight after Coolum we began with the new bike and it’s really good for supercross – lighter, thinner and it turns so good. The more time that I spend on it, the better I have been getting, so it’s been a good transition and I’m hoping to show everybody what it’s capable of.

“This year I want to be on the podium week in, week out, battling at the front of the field. There are a lot of good guys from both Australia and America in the field, so I just want to be up there and fighting for positions while being as consistent as possible.”

This year has proven to be a breakout season for the number four, lodging a number of podiums and recording a host of impressive results in the Pirelli MX Nationals, despite the outdoors not being his favoured discipline.