Kawasaki to split with Dyson Motorsports at conclusion of 2018

Companies part ways in mutual agreement ahead of next year. 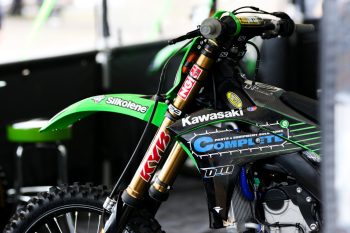 In a mutual agreement, Kawasaki Motors Australia and Dyson Motorsports will part ways at the conclusion of the 2018 Australian Supercross Championship.

The Newcastle-based operation will continue to field Jace Owen and Aaron Tanti in the upcoming supercross championship that is scheduled to commence this weekend, prior to going their separate ways for 2019.

This year’s MX Nationals was a significant success for Complete Parts Kawasaki Racing, leading Tanti to third in the MX2 point-standings with two round wins to his credit aboard the KX250F. New Zealander Rhys Carter also displayed great potential on his way to seventh in the MX1 championship.

Complete Parts Kawasaki Racing has quickly become recognised as one of the most professional race teams in the country, with strong management, clear direction, hard-working athletes and superb technicians. All of those elements combined resulted in a large presence throughout the MX Nationals as the primary Kawasaki Motors Australia-supported team.

At this stage it remains unclear what Kawasaki Motors Australia or Dyson Motorsports plans are beyond the current season.