Pro class updates direct from round 10 of the season in Queensland.

Post-race updates from the MX1 and MX2 classes at round 10 of the 2018 Pirelli MX Nationals, direct from Coolum in Queensland. 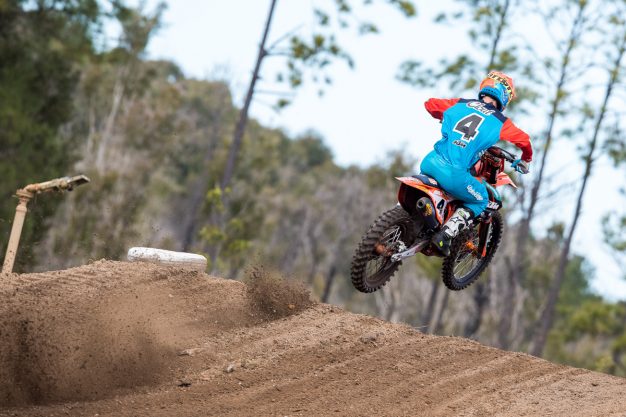 Pirelli MX2 moto two:
Complete Parts Kawasaki Racing’s Aaron Tanti edged his way to the hole-shot in race two, however it was race one winner Wilson who stole the lead in the coming corners. It wasn’t long before Webster negotiated his way into the top spot, ultimately running away with a 8.404s advantage over Wilson. Harwood settled for third in a relatively tame race for the quarter-litre field, as champion Todd and Roberts concluded the first five. Fulfilling positions six through 10 was Joel Evans (Husqvarna), Barham, Pozniak, Tanti and Kale Makeham (Penrite CRF Honda Racing). Webster was granted the overall on countback ahead of Wilson and Harwood, while in the standings it was Todd, Harwood and Tanti.

Thor MX1 moto two:
Clout shot-out to the lead with a mega hole-shot in the final moto of the day, although Evans quickly moved himself into P1 within a matter of corners. From outside of the top five, Ferris was leading the field in the opening stages and was unchallenged in his campaign that saw him wind up with a 34.356s advantage over a hard-charging Evans. A strong showing from Ward in third allowed him to capture third overall behind Evans and Ferris, as Metcalfe and Norton fell into positions four and five. Concluding the top 10 was Long, Clout, Carter, Small and Creech. In the standings it was Ferris, Evans and Clout.