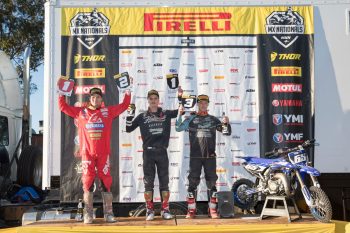 Rounds seven and eight again proved successful for Yamaha Racing with all riders and teams coming away with impressive results and commanding positions in their respective championships.

With just two rounds remaining in the 2018 MX Nationals Championship, Yamaha lead the MX1 division with Dean Ferris over 100 points clear and a real possibility to wrap up his third consecutive MX Nationals crown at round nine.

Wilson Todd holds a 57 point lead in the MX2 class after a consistent weekend at Raymond Terrace and showing real maturity in his racing. Jay Wilson has moved into fifth place after a strong weekend and can still climb higher in the championship with two rounds to go.

Yamaha also have a stranglehold in the MXD category with Bailey Malkiewicz, Hugh McKay, Max Purvis and Brodie Ellis in positions one, two, four and five respectively. The MXD class has proven to be a real battle with plenty of riders showing good speed.

To view the bLU cRU round recall video: https://youtu.be/UDKjMXL5f9I

CDR Yamaha Monster Energy Team– MX1
“Raymond Terrace was a good weekend for the team and an all-round team performance with both riders getting on the podium both rounds. Dean didn’t have it all his own way and had to race with his head to get the round win on both days. The track didn’t separate the riders a lot as it was fast and simple but he was still able to find a way to win and that’s pleasing when he can find a way when the cards don’t always fall your way.

“Dylan had a break through weekend and we are excited to see him show his full potential. He won two of the four races, finished on the podium both days and moved to fourth in the championship so it was a great weekend and a complete weekend for the team.

“It’s the kind of riding we expect from Dylan and know he can reproduce it so hopefully this weekend was just the beginning for him and podium results can become a lot more common for him in the future,” explains CDR owner, Craig Dack.

Serco Yamaha – MX2
“I think Wilson raced well again on the weekend and did exactly what was required from him to continue his control of the championship,” begins Serco boss, Gavin Eales. “When a race was there to be won, Wilson won it, when it required a cool head and a sensible approach, he did it and was rewarded with two podium results from the weekend and an increase in his championship lead.

“The last two rounds are in Queensland and tracks that he has done well on before and Wilson being Wilson will be out to keep his momentum going. He has too much pride to just roll away and he is a racer at heart so he will keep pushing for race wins and finish the championship off strongly.”

Yamalube Yamaha Racing – MX2
“A bit of an up and down weekend for us in that it takes four good motos to get on the podium when the field is so evenly matched. Both Jay and Richie were able to have three good rides but each had a race that just let them down and took away any podium opportunity. But the most pleasing thing was both finished the final moto strongly and can build on that for the final two rounds,” Scott Bishop says of the teams’ weekend.

“Jay started the weekend slowly but improved dramatically. Over the four motos he went 8-3-5-4 and just missed the podium both days. He has moved to fifth now and his track speed is good so we expect a big finish from him.

“Richie finished inside the top 10 each round and struggled with starts all weekend. He finally cracked a good one in the final moto and finished fifth so it was a good boost for him to see that he belongs towards the front of the field.”

WBR Yamaha – MXD
“A good weekend for our team and we leave here running first and second in the championship,” Travis Whitten enthuses. “Bailey rode exceptionally well and bounced back from his tough weekend at round six to win three of the four races and take the championship lead. He got great starts all weekend and was clearly the best rider in MXD this weekend.

“Hugh had to overcome a nasty finger injury that he sustained in practice on Saturday morning and it is a credit to his toughness that he was able to get through the weekend and still achieve some great results. He obviously wasn’t 100%, but he soldiers on and kept his championship hopes alive at Raymond Terrace.”

Round nine of the championship heads to the mining town of Gladstone in central Queensland on August 5 before a very quick turnaround for the 10th and final round of the series at Coolum on August 11/12.