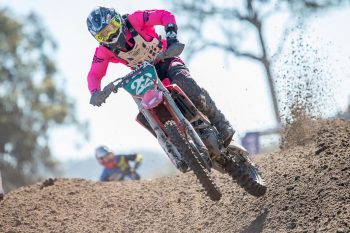 Honda RIDE RED riders worked hard over the weekend at the back-to-back rounds 7 and 8 of the MX Nationals Championship, coming away with podiums and top ten finishes.

Rhys Budd charged to 3 rd overall in the MXD class at round 7, a huge achievement for the young rider having stepped up from Honda’s junior race team at the start of this year to take on his first season racing in the MX Nationals.

“I am slowly gaining confidence and momentum. My speed was good in round 7, in fact I was running the same pace as the top 10 MX2 riders which was great to know. This was a really nice result for me personally and for Honda but I know I still need to work on being consistent,” said Budd.

Honda’s other MXD rider, Jai Constantinou came away with 11th. Round 8 proved more difficult for the Honda duo in the MXD class as Budd struggled to make passes as the track was fast, with minimal lines, he took 8th overall. Constantinou suffered a crash in moto 2, which resulted in no points and 26th overall. Championship standings place Budd in 6th and Contantinou in 16th.

These results aren’t what they expected and they will work harder to finish stronger in the final two rounds of the Championship. Ricky and Lochie sit 15th and 20th respectively in the MX2 championship.

“We didn’t have the bike speed this weekend, we were a little off with setup and we both struggled,” said Ricky. “We will continue to push as we know we can do better,” said Lochie.

“This was a decent weekend for me; I had two top ten overall finishes and felt strong,” said Wightman.

“I am pumped with 9th overall, it’s been hard to come back from the injury I sustained at round 2 and this was rewarding for everyone involved,” Davis said.

Joel Green finished 15th and 19th across both rounds and Isak Maule had a reasonable weekend finishing 19th and 16th . Joel Wightman continues to improve his overall Championship position and currently sits in 9th , Maule has also moved up to 15th and Green and Davis sit in 19th and 20th.