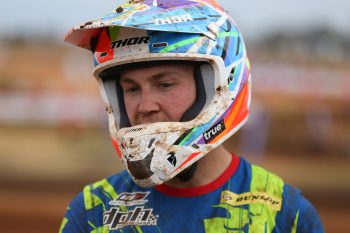 DPH Motorsport Husqvarna’s Kade Mosig has confirmed a provisional suspension will force him out of rounds seven and eight of the 2018 Pirelli MX Nationals at Ranch MX.

Rumours began to circulate this afternoon at the circuit that 28-year-old Mosig would be absent, later made official by the Victorian via social media.

“Sorry to inform everyone, unfortunately I won’t be racing this weekend at Raymond Terrace,” Mosig stated. “I have been provisionally suspended from racing until further notice. This is an extremely difficult time for me – I want to apologise to all the people that support me.”

Mosig has been the lone person to win a moto ahead of reigning MX1 champion Dean Ferris in 2018, capturing overall podiums at Wonthaggi, Murray Bridge and Conondale. He currently sits fourth in the MX1 standings.

Although there has been no indication that it is related, it is understood Mosig was one of multiple riders to undergo Australian Sports Anti‑Doping Authority (ASADA) testing in South Australia. Testing also took place at the Appin round earlier this season.

Attempts to contact both Mosig and the DPH Motorsport team this afternoon have been unsuccessful. Motorcycling Australia (MA) and series promoter Williams Event Management (WEM) have been unable to provide any further information.