No plans to release CRF450R Works Edition in Australia. Honda has revealed its off-road line-up for 2019, announcing a host of the revisions for its widely-popular CRF450R and CRF250R motocross models.

One of the industry’s top-selling motocross models, the CRF450R, receives a number of important updates for 2019. Better engine performance is achieved through a new combustion-chamber shape, as well as improved over-rev characteristics through a refined oil-management system.

The frame and swingarm have been revised for optimised rigidity and weight reduction, while the braking system has been updated with a lightweight front brake caliper featuring a large-piston design. As a result of the weight-saving measures, the CRF450R comes in at roughly 800 grams lighter than its predecessor. Riders can select from three engine modes for ideal performance depending on conditions, while HRC launch control has been adopted for improved race-start performance. 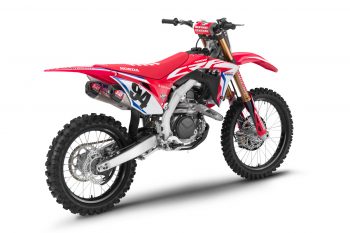 A Renthal Fatbar handlebar sits in a four-position-adjustable top clamp, while the braking system has been updated with a lighter, CRF450R-inspired caliper with larger piston for optimum braking performance. Black rims are standard.

Honda Motorcycles Australia confirmed there no plans to bring the additional models announced at the world launch into Australia, such as the CRF450X, CRF450X, CRF450RX and CRF450RWE, which has host a of high-performance components and sports a Ken Roczen Honda HRC livery. The CRF450L will however make its way into dealerships domestically, with an anticipated release of spring 2018.

For more information on pricing and availability, visit www.motorcycles.honda.com.au.