Pro class updates direct from round four of the season in Victoria.

Post-race updates from the MX1 and MX2 classes at round four of the 2018 Pirelli MX Nationals, direct from Wonthaggi in Victoria. 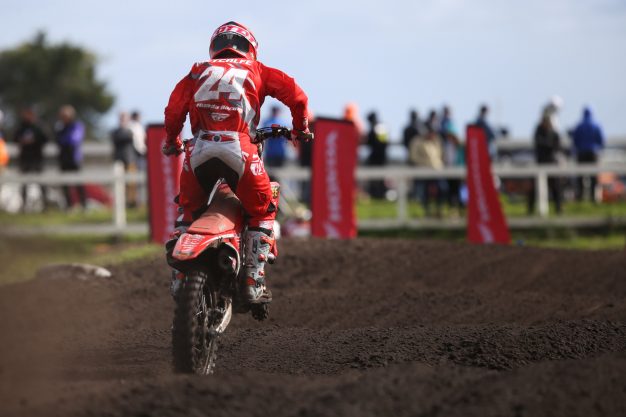 Pirelli MX2 moto one:
The opening MX2 moto of today saw Serco Yamaha’s Wilson Todd establish himself out front early, taking the hole-shot and riding his own race to a 5.347s advantage. Behind him, Aaron Tanti (Complete Parts Kawasaki Racing) had his best ride since the opener to take second, with New Zealand champion Hamish Harwood (Davey Motorsports KTM) clawing his way to an eventual third. It was a lonely fourth for defending champion Egan Mastin (KTM Motocross Racing Team), as Jay Wilson (Yamalube Yamaha Racing) filled the top five. Points leader and top qualifier Nathan Crawford (Serco Yamaha) pushed hard to sixth position after encountering issues of his own including a crash, as Dylan Wills (DPH Motorsport Husqvarna), Jy Roberts (Husqvarna), Kale Makeham (Yamaha) and Cooper Pozniak (Yamaha) were the top 10. Yesterday’s winner Kyle Webster (Penrite Pirelli CRF Honda Racing) was again running among the front of the field, but exited with an overheating motor as a result of the mud in the race’s closing stages.

Thor MX1 moto one:
Defending MX1 champion Dean Ferris (CDR Yamaha Monster Energy Team) picked up where he left off yesterday by sprinting away to victory by 16.980s ahead of rookie Mitch Evans (Raceline Pirelli KTM) in another standout performance. While Ferris took charge at the front of the pack, Evans worked his way by KTM Motocross Racing Team’s Kirk Gibbs around the midway point and that’s where they would remain. It was a consistent ride from Kade Mosig (DPH Motorsport Husqvarna) for fourth ahead of Dylan Long (CDR Yamaha Monster Energy Team). Sixth was Luke Clout (KTM Motocross Racing Team) after a mistake dropped him down the order from fourth, as Brett Metcalfe (Penrite Honda Racing), Rhys Carter (Complete Parts Kawasaki Racing), Connor Tierney (Yamaha) and off-road champion Daniel Milner (KTM Enduro Racing Team) completed the top 10. It was a frustrating finish for Carter especially, running as high as fourth until a late error bumped him back to P8.

Pirelli MX2 moto two:
It was a perfect Sunday for Todd in the second MX2 moto, storming out of the gates and then going on to win by 18.692s seconds at the conclusion of the 20-minute duration. Behind him, number one plate-holder Mastin turned in his best finish of the year with second on the factory KTM 250 SX-F, with rookie privateer Roberts starring on his way to third. Kiwi Harwood again delivered a strong result on his two-stroke, followed by Tanti and then Wills, Ricky Latimer (Honda), Makeham, Webster and Cody Dyce (Empire Motorsports Yamaha). Bike issues forced previous points leader Crawford out of the race early, enabling teammate Todd to take charge of the red plates by 16 points, courtesy of his overall round win at round four. He was joined on the overall podium by Mastin and Harwood.

Thor MX1 moto two:
Jumping out of the gates at the front of the field was premier class newcomer Evans on-board his satellite KTM 450 SX-F, leading the opening laps while under pressure of the ever-dominant Ferris. After biding his time, Ferris finally hit the front and was never headed from there, eventually finishing 13.676s ahead of Evans, while Mosig was much-improved for third this time out. Long was well ahead of Gibbs as they completed the top five, with Ward, Clout, Metcalfe, Tierney and Milner finishing in that order. An unblemished record for Ferris across the double-header weekend saw him maintain his winning-streak through the first eight motos of the season, scoring the overall as a result ahead of Evans and Mosig, who took his first podium aboard the factory-supported FC 450 for the year.